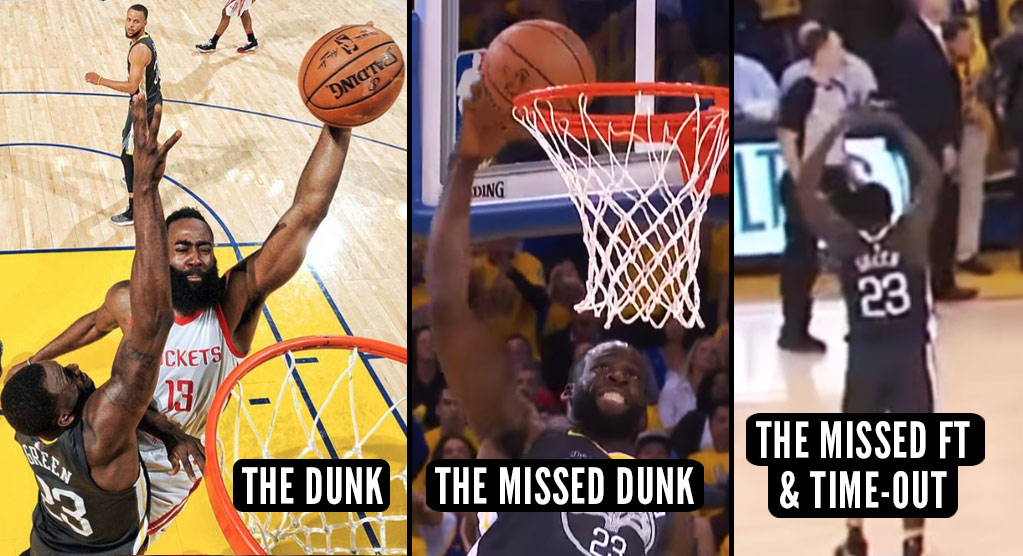 If you just look at the boxscore from Game 4 between the Warriors and Rockets, you might think Draymond Green had a decent night: 11 points ...(Read more)

If you just look at the boxscore from Game 4 between the Warriors and Rockets, you might think Draymond Green had a decent night: 11 points (shot 50%), team-high 14 rebounds, game-high 8 assists, 2 steals and a block. If you look closer, you will see he turned the ball over a game-high 5 times in the 95-92 loss that saw the Warriors get outscored 25-12 in the fourth quarter. A fourth quarter that saw Draymond blow some easy opportunities.

Before we get to those opportunities, let’s go back to the second quarter, when James Harden delivered such a nasty facial on Green it caused Chris Webber to have an on-air orgasm while watching the replays in slow motion. The dunk was two of Harden’s 24 first half points and one of his top 3 facials ever (other nominees include Gordon Hayward, Derrick Favors, Aron Baynes, and Khloe Kardashian).

That was probably his first poster in the NBA where it was that nasty! I don’t recall many at all! However, when you are a defender ISH happens!

She also said the dunk provided some “late dinner humor.”

Back to the fourth with the Warriors up by four with about eight minutes left in regulation, Green tried to throw down a one-hand dunk (over nobody) and missed it! All I could think of while watching replays of the ball getting stuck on the rim was Bill Walton yelling, “Throw it down with two hands big man!” and all my Asian gambling addicts/friends yelling, “He’s shaving points!”

Green failed to make a field goal during the Warriors’ fourth quarter collapse but did get an opportunity to pull his team within a single point by knocking down two freebies with 37.7 seconds left. He made the first. He missed the second. My drunk Asian gambling friends screamed “He’s shaving points!” again.

The Warriors did have a final shot in the final seconds, which ended with Kevin Durant giving up the ball to Klay Thompson, who ended up taking a horrible shot. The internet was screaming, “Why didn’t they take a time-out?” And if you look closely at Draymond during the play, he was trying to call one. The refs ignored him because he didn’t have the ball in his hands and isn’t named Steve Kerr.

After the game, Draymond was pretty calm and didn’t sound too concerned about the Rockets tying up the series.

“It was a very fun game to play.” Draymond said. “We know we made a lot of mistakes down the stretch of the fourth quarter but we’ll be fine.”

He also didn’t care that his technical in Game 3 was not going to be rescinded.

Speaking of Draymond, the refs and shaving points, here’s another great tweet from Draymond’s Mom during the game.

Man I swear the REFS have their own agenda! #theymustbetonthegame