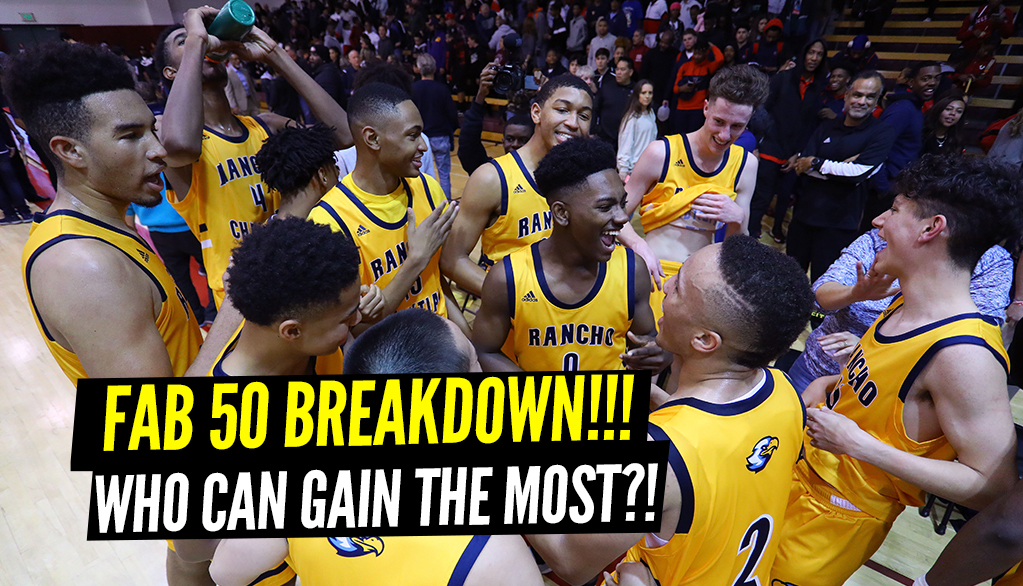 A closer examination into our preseason FAB 50 National Rankings, breaking down teams that could make big moves up the list during the season.

FAB 50: Five Teams With the Most to Gain Nationally

Earlier this week, Ballislife Grassroots Editor Ronnie Flores dropped the 2019-20 preseason FAB 50 rankings in a three-part series. In compiling and sorting the Top 50 teams in the country, Flores took into account not only his own knowledge of returning players and impact transfers, but he also polled coaches across the nation to gather as much information as possible to create an educated list. Of those 50 teams, the five below are those we believe have the ability to make big moves up the rankings as the season goes on.

The Crusaders, which open at No. 36 in our preseason FAB 50 National Rankings, have two things working in their favor as a team with the ability to make a major leap forward. First, Stepinac boasts a talented roster led by two big-time high school prospects in North Carolina-committed guard R.J. Davis and top-five junior Adrian Griffin, Jr. Griffin only played 16 games last season due to injury, but in those contests he was a double-double machine, putting up 20.9 points and 10.9 rebounds per game. We were never really able to see what the duo of Griffin and Davis were capable of, but this season will be much different if health permits. The Crusaders will have a chance to prove themselves early against some of the country’s best at the City of Palms tournament, opening with FAB 50 No. 49 Briarcrest Christian (Tenn.). If they can get past Briarcrest, it would set up a potential match-up with No. 1 IMG Academy. Stepinac will then take on No. 4 Paul VI (Va.) at the Slam Dunk to the Beach event in Delaware, and, if all goes according to plan, the Crusaders could see No. 20 Long Island Lutheran in the New York Catholic High School Athletic Association Class AA championship.

Those who don’t follow the Southern California hoop scene closely may not know much about the Eagles, who rank No. 29 in the preseason FAB 50. Etiwanda doesn’t have a ton of guys with major college or mixtape hype behind their names, but instead have a fearless group led by one of the best defensive high school coaches in America, Dave Kleckner. The Eagles won’t venture too far outside the Inland Empire, making trips to West Los Angeles for the Westchester Tournament, Pasadena for the SoCal-Vegas Challenge and to Santa Ana for the Nike Extravaganza at Mater Dei. All eyes will be focused on the Classic at Damien post-Christmas tournament as FAB 50 No. 6 Sierra Canyon and No. 21 Rancho Christian are also in that loaded field. If Etiwanda can make deep run in La Verne and upset two of the three in-state teams ahead of them, the Eagles could be sitting pretty in the rankings if they handle Baseline League play as expected.

As my colleague Flores wrote in his Patrick School blurb, the No. 15-ranked Celtics have as talented of a team as we’ve seen since 2009 and 2010 when Kyrie Irving and Michael Kidd-Gilchrist headlined the roster. Patrick School coach Chris Chavannes even went as far as saying that this may be the most talented team in the history of program. With as much anticipation as this team has, how could they possibly fall into the category as most to gain? Well, the Celtics currently sit in second behind Roselle Catholic (No. 13) among New Jersey teams represented in the FAB 50 and it’s very likely that those two could face each other three times this season – twice in Union County League play and potentially once in the postseason. Patrick School certainly has the pieces to make a major statement this season with top-ranked junior Jonathan Kuminga joining highly-regarded senior Noah Farrakhan, Top-60 junior Adama Sanogo and 6-10 junior Bretner Mutombo, but the personnel must come together quickly as the Celtics will play in the John Wall Invitational, Kyrie Irving Invitational and Metro Classic. Patrick School will also play one-off games against Sierra Canyon in Minnesota and Whitney Young at HoopHall.

Our No. 21 team comes in as an interesting case study. The Eagles have the top prospect in the country in Evan Mobley, but the roster takes a slight dip in star power after that. Gonzaga-bound point guard Dominick Harris is coming into his own as a passer and decision maker, while fellow guards Jaden Byers and Bryson Stephens have made positive improvements in their games. The keys for Rancho Christian to make a push higher in the rankings will be the consistent shooting of 6-6 junior Luke Turner and the toughness and defensive prowess of newcomer Jayce Catchings by way of Missouri. With the loss of Isaiah Mobley (USC) the expectations on this year’s Rancho Christian team are far lighter than they were a season ago, but coach Ray Barefield didn’t cupcake his schedule with that in mind. Rancho Christian will play Christ The King at HoopHall West in Arizona, then head to the Capital City Classic in Oregon and come back to the Classic at Damien after Christmas where it could see Sierra Canyon in the championship. In January, the Eagles will play Sierra Canyon on the 11th, then head back east to play Camden (NJ) and preseason No. 3 DeMatha (Md.) at the HoopHall Classic. As expected, Rancho Christian is trending as a CIF Southern Section Open Division team, where seven of the best Southern California teams will be waiting.

The Lions are one team that Ronnie expects to make a move up in the rankings as the season goes on. Yates is filled with talented and experienced returning players and are led by a veteran coach, Greg Wise, who has high hopes for this season, saying “This is the most talented and deepest team I have had.” The Lions are going to play an uptempo all-out pressure style similar to what they did in 2009-10 with the team that went 32-0 and finished No. 1 in the FAB 50 rankings. It won’t take long to see if this is a good or bad take because Yates will be tested early with games against No. 12 Sunrise Christian Academy (Kan.) and No. 2 Montverde Academy at the Thanksgiving HoopFest on Nov. 29 and 30. The Lions should also compete again for the University Interscholastic League (UIL) Class 4A championship again this season.