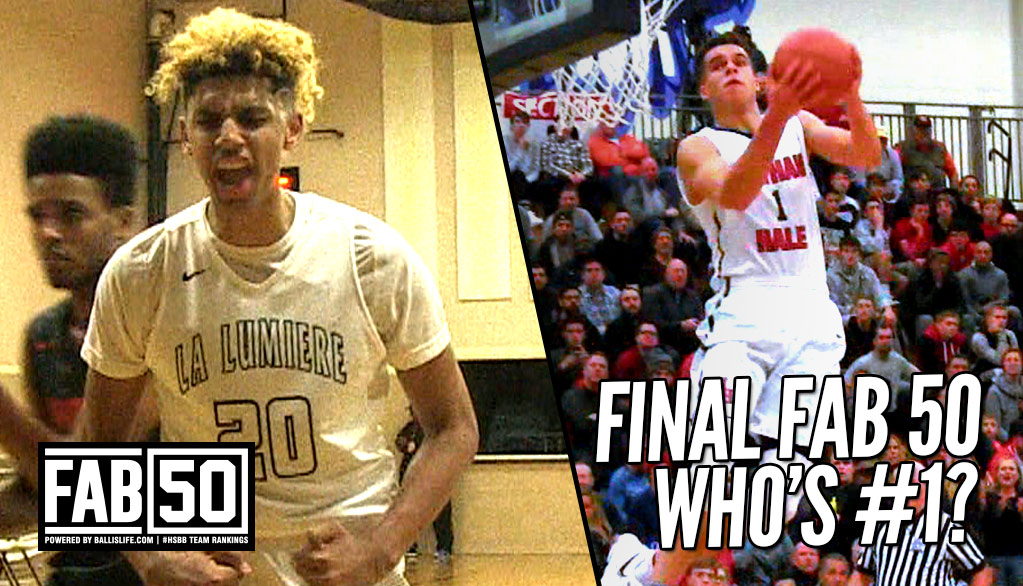 Nathan Hale of Washington captures the FAB 50 national crown presented by Ballislife.com by ascending to No. 1 with a key tournament title and showcase wins. ...(Read more)

Nathan Hale of Washington captures the FAB 50 national crown presented by Ballislife.com by ascending to No. 1 with a key tournament title and showcase wins. The Raiders edge La Lumiere of Indiana, which does not compete for a state title but closed out its season by winning the Dick’s Nationals tournament in New York. Read on for an explanation of the Hale-La Lumiere decision and check later this week for final regional Top 20 rankings and expanded FAB 50 rankings with write-ups for all 50 teams.

Entering the Dick’s Sporting Goods National High School Tournament this past weekend in New York, three teams had a realistic shot to finish as the No. 1 team in the final 2016-17 FAB 50 National Team Rankings powered by Ballislife.com and capture the mythical national title for boys high school basketball: FAB 50 No. 1 Nathan Hale (Seattle, Wash.), No. 2 La Lumiere (La Porte, Ind.) and No. 13 Shadow Mountain (Phoenix, Ariz.).

No. 3 Memphis East (Memphis, Tenn.) had three losses on the season, including one to Sierra Canyon (Chatsworth, Calif.), the same team that handed La Lumiere its only loss going into the final event of the season. Shadow Mountain was eliminated from consideration when it lost to No. 5 Montverde Academy (Montverde, Fla.) in the opening round of Dick’s Nationals, 74-61. Shadow Mountain gave a valiant effort without the suspended Jaelen House, but with the loss fell from the ranks of the undefeated.

Montverde Academy, which won one of three contests versus Memphis East, advanced to the title game after routing No. 20 Greensboro Day (Greensboro, N.C.), 72-45, in its semifinal contest. The Bengals upset No. 6 IMG Academy (Bradenton, Fla.), 59-40, in the opening round after IMG came into the event with one of the best overall resumes in the eight-team field. JP Moorman had 15 points, seven rebounds and four steals while Jordan Perkins added 15 points and seven rebounds.

In the final FAB 50 rankings, Shadow Mountain falls three spots to No. 16, as No. 17 Tift County (Tifton, Ga.) fared worse in its matchup with Montverde Academy than the Arizona Class 4A state champions did. IMG did lose to Greensboro, but coach Vince Walden’s club came into the event with wins over 10 currently or previously FAB 50 ranked teams, including two wins over No. 9 Patrick School (Elizabeth, N.J.). So in the final analysis, IMG drops two spots to No. 8. Greensboro Day rises seven spots to No. 13, as the Bengals deserve to be ranked ahead of No. 14 Brentwood Academy (Nashville, Tenn.). The Tennessee Division II-AA state champs did not beat a team the caliber of IMG and one of its two losses was to Pebblebrook (Mableton, Ga.), which lost to IMG.

When Montverde Academy advanced to the Dick’s Nationals title game, it eliminated No. 4 Imhotep Charter (Philadelphia, Pa.) because the Eagles defeated enough FAB 50 ranked teams to overcome the head-to-head loss against a one-loss team. Their opponent in the title game was top seed La Lumiere. The Lakers advanced to the title game with wins over Wasatch Academy (Mt. Pleasant, Utah), 64-52, and No. 10 Findlay Prep (Henderson, Nev.), 54-52. La Lumiere defeated Findlay Prep for the second time this season in the semifinals and was in control until the Pilots made a valiant, late fourth quarter comeback. The comeback fell short because Finlay Prep made only 14-of-35 free throws, including two costly misses in the closing seconds. Findlay Prep finishes at No. 10, as it beat No. 11 Oak Hill Academy (Mouth of Wilson, Va.) twice during the season, including a 77-65 opening round victory.

The championship game between La Lumiere and Montverde Academy was a close affair until the Lakers took control with a big third quarter. Montverde Academy led 28-27 at halftime, but McDonald’s All-American Jaren Jackson (Michigan St.) opened the third period with a 3-pointer and the Lakers never looked back. They outscored the Eagles, 20-10, in the quarter, closing it with a 3-pointer by Jordan Poole (Michigan). It was all La Lumiere in the fourth period as it rolled to a 70-52 victory.

Bowen (uncommitted) was named tournament MVP after averaging 18.3 ppg and 7.7 rpg, as La Lumiere erased the memories of a painful loss at the overtime buzzer to Oak Hill Academy in last year’s Dick’s Nationals title game. Was the win enough to earn La Lumiere its first mythical national crown after winning the event for the first time?

After all the results were in, the decision was made to keep Nathan Hale at No. 1 and La Lumiere at No. 2. With the announcement of that decision, Nathan Hale becomes the first team from the state of Washington to win the FAB 50 national title. The highest ranked team prior to the Raiders’ run this season was Rainier Beach (Seattle) in 2014, which played at Dick’s Nationals, lost in its opener and finished No. 6 in the 2013-14 FAB 50.

It wasn’t an easy decision to make, and that’s before considering the off-the-court decision by the Raiders to turn down a Dick’s Nationals invite. That decline made the decision more complicated, but the on-the-court factors outweigh the off-court decision. By focusing on the results, over time, it leads to more accurate rankings.

There were at least three factors that led to Hale being named the 2016-17 mythical national champions. One, coach Brandon Roy’s team was No. 1 for several weeks after the turn of the New Year. If we felt it didn’t deserve to be No. 1, we never would have ranked them in that position. All positions in the FAB 50 are decided by results, but the top spot is special and a team basically can’t be hopped from that spot.

That leads to our second main factor. We rarely, if ever, will drop a No. 1 team from that position if it doesn’t lose on the court. Flipping Hale and La Lumiere might make sense in some ways, but it would also make the results and rankings from the previous 15 weeks irrelevant. When Hale rose to No. 1, it was playing like a No. 1 team, there were no quarrels and it made sense.

The third factor is huge. La Lumiere’s only loss was a 76-74 set back to No. 21 Sierra Canyon (Chatsworth, Calif.) at the Hoophall Classic in Massachusetts. Nathan Hale defeated Sierra Canyon, 67-65 in the title game of the Les Schwab Tournament in December. Obviously head-to-head results is the best rankings barometer, but the common opponent factor is huge, especially when dealing with such a huge number of school eligible for the FAB 50 or even with just the results of the teams with a realistic shot to be nationally-ranked.

Now, it can be argued that Hale’s win over Sierra Canyon had less significance as the season wore on and it many respects that’s true. Some credible national polls felt Sierra Canyon was the preseason national No. 1 and it certainly had the personnel to make a legitimate run at the mythical national crown. Sierra Canyon went on to lose two more games and it did not win a section or state title. Hale’s win over that team can now be deemed weaker than when it occurred, but in the same token La Lumiere’s loss can be viewed with greater significance. Sierra Canyon’s overall resume can’t shine a negative light on only Hale and not La Lumiere. The Dick’s Nationals champ lost to a team that didn’t win any significant hardware.

There is no doubt Hale’s decision puts some damper on its mythical national crown. The program had an opportunity to participate in the event and chose not to. Of course, Hale was already No. 1 and we can’t say with certainty in the future in a similar situation we won’t flip-flop between a No. 1 and No. 2. The decision just wasn’t enough to make the move this time considering the above-described factors.

We like to see teams, particularly ones belonging to state associations, participate in Dick’s Nationals. It’s a quality, well-run event and we’d like to see it grow with even more teams. Of course, the event also leads to more results that make the FAB 50 more accurate. Right now, however, not enough state associations allow their teams to participate to automatically make the event’s winner the de facto No. 1 ranked team.

In the future, we’d like the see state associations that allow its potential state champions to participate to have its teams publicly declare their intentions for a potential invite before the conclusion of the state tournament. Perhaps its state champions won’t be chosen, but the public and event organizers will know beforehand which teams it will have in its selection pool before the team’s ranking position is known going into the event. In that scenario, teams would publicly declare their intentions to participate, attempt to win a state crown and hope for an invite. It would help prevent future No. 1 teams from having so much leverage in the situation and declining an invite.