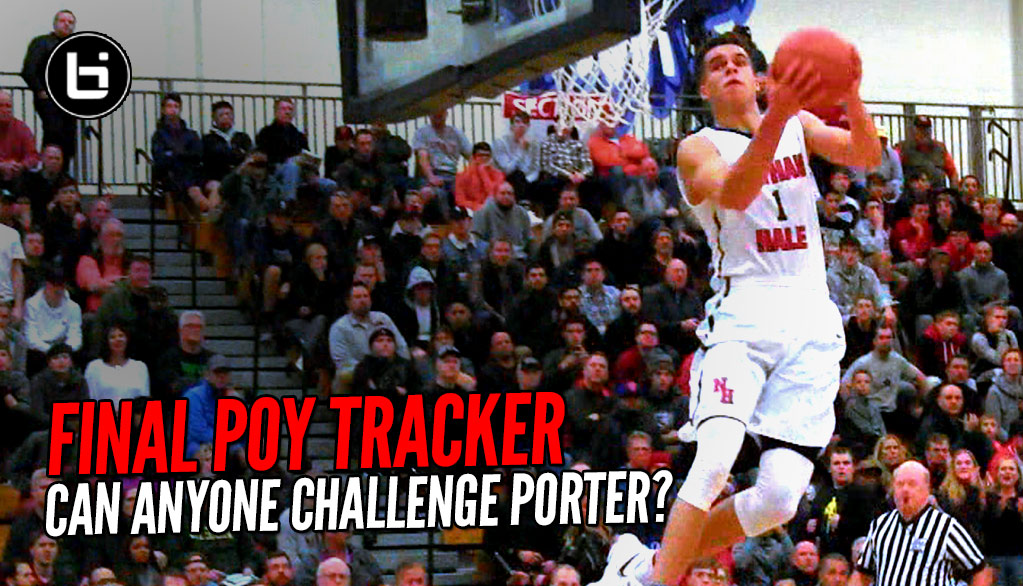 The finals, expanded ballots are in and after they are tallied, for the second time in three years there is a consensus top candidate. Missouri bound forward Michael ...(Read more)

The finals, expanded ballots are in and after they are tallied, for the second time in three years there is a consensus top candidate. Missouri bound forward Michael Porter Jr. of FAB 50 champion Nathan Hale (Seattle, Wash.) nets a perfect score of 100 overall points. The players that received at least one second-place vote are Arizona-bound center DeAndre Ayton, Alabama-bound Collin Sexton, senior forward Brian Bowen and standout juniors Zion Williamson and Marvin Bagley III.

When it came to team rankings this season, there was a spirited debate at the top between undefeated No. 1 Nathan Hale (Seattle, Wash.) and one-loss and No. 2 La Lumiere (La Porte, Ind.). As the results of the final Mr. Basketball USA Tracker powered by Ballislife.com indicate, there is no debate at the top of the list when it comes to individual player honors for the 2016-17 season.

Even after production at major holiday tournaments, showcases and various state playoff tournaments around the country changed positioning among candidates, the front-runner for national player of the year never did as the season wore on. Michael Porter Jr., a highly-skilled 6-foot-9 forward who led Nathan Hale to the FAB 50 national title, was the No. 1 vote-getter on every single ballot in the final voting, just as he consistently was on each ballot throughout the season.

Porter joins 2014-15 Mr. Basketball USA Ben Simmons of Montverde Academy (Montverde, Fla.) as the only two players in the 10-year history of the Mr. Basketball USA Tracker to earn a perfect score of 100 points on any single ballot. Similar to Simmons, Porter went wire-to-wire as the top vote-getter with 100 points in each round of voting results. He finished the season averaging 37.6 ppg, 14.5 rpg and 5.2 apg for a 29-0 club and answered the bell every time the Raiders needed big plays in their big games.

Even though Porter didn’t play in the Jordan Brand Classic while nursing a back injury, it didn’t matter as the strength of his candidacy was already sealed. He tied Kentucky-bound Jarred Vanderbilt with a team high 19 points for the USA Junior National Select team in its 98-87 victory at the Nike Hoop Summit. He was also named team MVP of the McDonald’s All-American Game with 17 points and eight rebounds.

“Let’s make no mistake about it, Michael Porter earned the top spot the old fashioned way…he just flat out outplayed the competition head to head,” said panel member Van Coleman of TheBasketballChannel.net. “At Nike, Pangos, and national high school events with Nathan Hale this past season he dominated individually and led his Mokan Elite squad to the EYBL title and Nathan Hale to mythical high school national title.”

The other candidates to appear on all ten ballots were undecided point guard Trevon Duval of IMG Academy (Bradenton, Fla.) and Arizona-bound center DeAndre Ayton of Hillcrest Academy (Phoenix, Ariz.). Duval was a bit more of a consistent candidate than Ayton during the season, but Ayton closed strong and the 10-man panel rewarded the nation’s most highly-acclaimed big man. He gained a point after appearing on nine ballots on the previous tracker and tallied the most second-place votes with five (an increase of two). He also had two third-place votes, while Duval tallied one third-place vote and one fourth-place vote. If not for two panel members who were lukewarm on Ayton’s candidacy (he was in seventh place and the final player selected on those two ballots), the gap between Porter and the rest of the candidates wouldn’t seem so large.

Although Ayton frustrated the panel at times because of his penchant for floating on the perimeter or because of a perceived lack of aggression, he deserves credit for being one of the very best players in high school basketball for three seasons. Not too many players over the years can legitimately make that claim. Last season, he finished in fourth place with 58 points and other than the two front-runners for the honor (eventually winner Lonzo Ball and runner-up Josh Jackson) Ayton was the only candidate to tally moe than one second-place vote. In the final 2014-15 tracker as a sophomore, Ayton had two second-place votes behind Simmons and appeared on six ballots.

For the 2016-17 season, Alton averaged 26.0 ppg, 15.0 rpg and 3.5 bpg and had eight points and 11 rebounds in the McDonald’s All-American Game. He was one of the top performers at the Jordan Brand Classic, with 19 points and eight rebounds in 18 minutes.

The other four candidates to receive second-place votes behind Porter were senior forward Brian Bowen, who averaged 18.8 ppg and 7.7 rpg in three Dick’s Nationals games and was named MVP, senior guard Collin Sexton, who averaging 34.6 ppg, 6.0 rpg and 4.1 apg for a 21-8 team, and the two most highly-regarded juniors in the nation, Internet sensation Zion Williamson and talented left-handed big man Marvin Bagley III.

In all, twenty-seven candidates earned recognition as a national player of the year candidate in the final, expanded tracker.

About Basketball USA Tracker Panel
Ballislife.com’s panel of 10 experts, which includes six McDonald’s All-American selection committee members, casts its vote for the top national player of the year candidates. Each panelist lists his top seven candidates regardless of class. The votes are then tabulated on a 10-point scoring system with a first-place vote equaling 10 points, a second-place vote earning nine points and down to four points for a seventh-place vote. The number in parenthesis refers to the numbers of ballots on which a player appeared and previous rankings refers to position in the previous tracker.