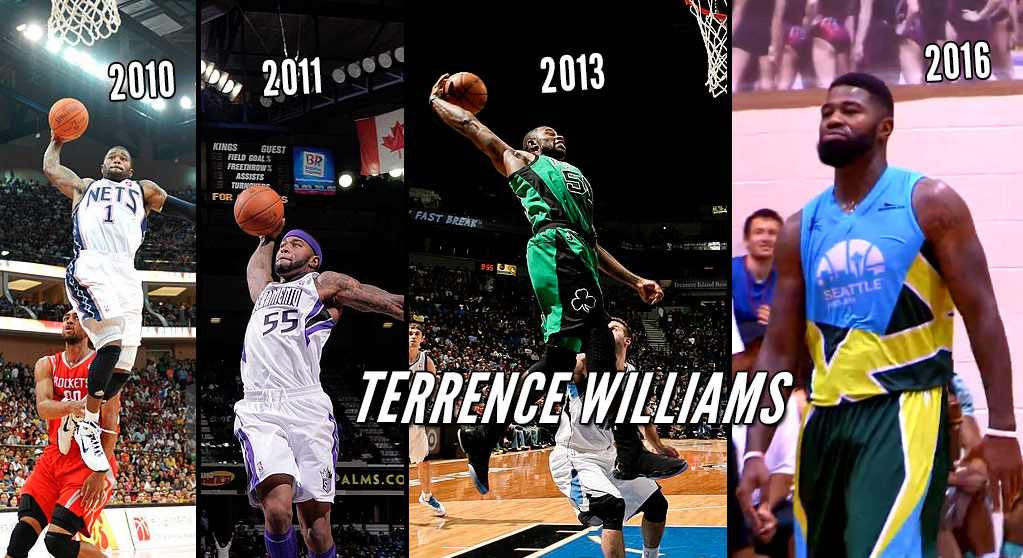 The Seattle Pro-Am championship game was tied at 112 with less than 24 seconds in regulation, you are probably expecting to hear Jamal Crawford took and made the ...(Read more)

The Seattle Pro-Am championship game was tied at 112 with less than 24 seconds in regulation, you are probably expecting to hear Jamal Crawford took and made the game-winning 3 to celebrate his 3rd straight championship. Well, he did get to celebrate his 3rd chip but it was his Brandblack teammate and former NBA player Terrence Williams,who took and made the game-winning 3.

So where has T-Will been?

For the past 7 years, Williams has been harder to find than Waldo: Brujos de Guayama, Marlaco Bolts, Soles de Santa Domingo, Reales de la Vega, Fuerza Regia, Vaqueros de Bayamon, Guaiqueries de Margarita and some league that was shut down before it even played a game. His last stint in the NBA was with the Celtics in 2013 – although he did play in the D-League in 2014, where he scored a then D-Fenders’ franchise record 50 points – but most NBA fans probably remember him from his high-flying Nets days between 2009-2010.

And maybe this performance from a double OT thriller against the Bulls.

For me, since I live in Houston, my favorite memory of T-Will is probably when he threw down this windmill dunk against the Spurs during his time with the Rockets.

And that was 5 years ago. So it feels good to see Williams back in the states, looking in shape and showing he still has a lot of game left in him but it would have felt better if his game-winner wasn’t against the Ball Is Life team.

Anyways, congrats to Terrence on the shot, Brandblack on the win and a big congrats to Jamal on another great summer of basketball action for the people of Seattle, who deserve a NBA team.

Thank you to @rashaad_powell the commish.. Toughest person to go up against all summer, and the man that runs the WHOLE @SeattleProAm #mybro

Thank you to @Ballislife & @balldontstop for helping us get coverage for the pro-am across the world..

Thank you to Ray and our whole security staff, Marci and everything she does at the pro am, Sue with our stats, our refs, trainers, coaches

Last but not least, thank you to all of you who come out each & every weekend to help us keep basketball alive in our community #206love