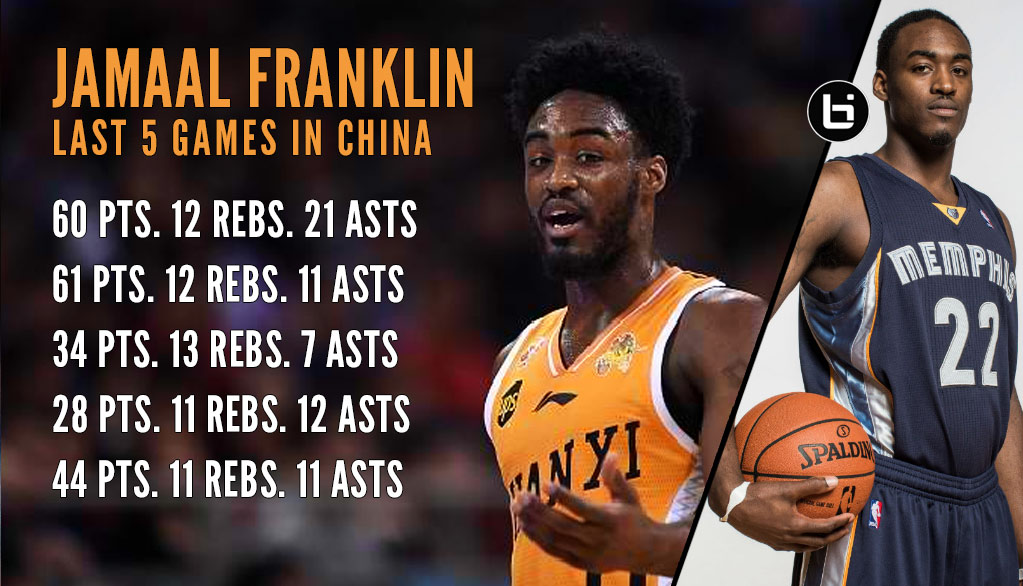 After sharing a video of Josh Smith going off for 41 points and 19 rebounds, while jacking up 18 3-pointers in a single game in China, ...(Read more)

After sharing a video of Josh Smith going off for 41 points and 19 rebounds, while jacking up 18 3-pointers in a single game in China, I mentioned a few other former NBA players putting up Wilt like numbers in the CBA. One of those players is former Grizzlies’ 2nd round pick Jamaal Franklin. He’s on a triple-double tear right now that makes James Harden’s numbers look cute (I know, I know, it’s just a joke).

The latest triple-double explosion came in a triple-OT loss to the Liaoning Leopards, with Franklin racking up a mind-boggling 60 points, 12 rebounds and 21 assists! And like Josh Smith, he had the green light to fire as many 3s as he wanted, finishing with 6 of 23 shooting from downtown. He was so worn out from the workload, he reportedly collapsed after the game and had to be helped to the locker room.

This performance is coming right after him winning the CBA Player of the Week award and putting up….you aren’t going to believe this…61 points, 12 rebounds and 11 assists in a game. Yes, you read that correctly and Franklin did have back-to-back triple-doubles with 60 points. He also had 10 3-pointers in this game.

After seven games, he’s now averaging 42.1 points, 11 rebounds and 10.3 assists per game. The second highest scorer on the team is former NBA big man Samuel Dalembert with 16.1 points per game.

Before we get into some throwback vids of Franklin playing in the US, here’s what “The James Harden of China” has done over his last five games.