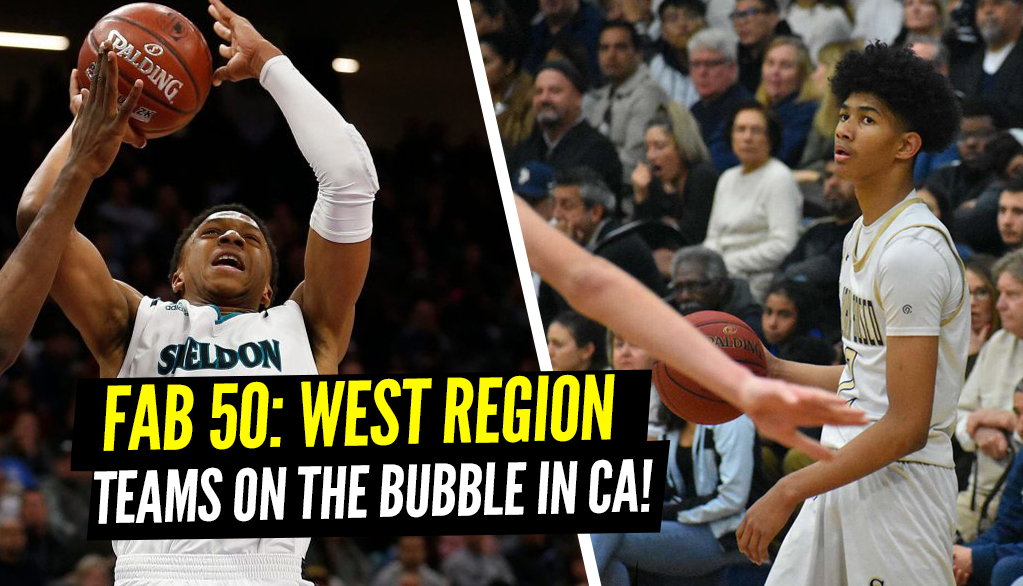 Following up on the drop of the much-anticipated preseason FAB 50 National Rankings, Ballislife Grassroots Editor Ronnie Flores took his research another step forward with his ...(Read more)

Following up on the drop of the much-anticipated preseason FAB 50 National Rankings, Ballislife Grassroots Editor Ronnie Flores took his research another step forward with his Top 20 Regional Rankings which he dropped earlier this week.

In this piece we take a deeper look at the West Region and which teams have the best chance to jump into the national conversation.

The Huskies, who come in at No. 10 in the West, have had the unfortunate luck of meeting Sierra Canyon in each of the last two CIF State Open Division title games. Both times Sheldon has failed to overcome the talent-laden Trailblazers, falling 76-52 in 2019 and 75-62 in 2018. But if we take a moment to look on the bright side of things, Sheldon has been the best team in Northern California for the last two seasons and will likely make it a third this year. The Huskies return a good chunk of its core from a season ago, including Arizona State-commit Marcus Bagley, who averaged just under 20 points per game last season. Joining Bagley are fellow seniors Xavion Brown, Xavier Brown, Dontrel Hewlett and Josh Williams along with talented junior Yaru Harvey. If Sheldon can make it through the early part of its season unscathed, it will have its chance to prove itself on the national scale in the top division of the Tarkanian Classic on Dec. 18-21 in Las Vegas.

The Braves start at No. 11 out West and boast a lineup that might not have a superstar talent, but one that meshes together well and features a good amount of depth. Braves’ head coach Matt Dunn is comfortable going five deep into his bench in crunch time, but look for junior Lamaj Lewis, senior Wynton Brown (Northern Arizona-commit), senior Josh Camper, 6-9 sophomore Jeremiah Nyarko and 6-10 senior Isaiah Holm to be the main sources of scoring for Bosco until San Gabriel Academy transfer Randi Ovalle is eligible at the end of December. Ovalle, a 6-7 sophomore wing, will add another layer of size, skill and scoring ability to an already strong group. The Braves will be in the top division of the Classic at Damien and have other key games their schedule, including a showcase game against Oakland (Calif.) Bishop O’Dowd on Jan. 4 and two Trinity League match-ups with Santa Ana Mater Dei.

The Wildcats have one of the necessary ingredients to make a run at the FAB 50 on a national scale: Two extremely talented players. Sophomores Dylan Andrews and Kijani Wright are poised to take the next step in their development, which is to lead their high school team to new heights. Andrews, a 6-3 point guard, had his maturity accelerated this summer by playing at the 17u level with his Compton Magic club team. Wright, a skilled 6-8 forward, will continue to be a match-up nightmare for most all of the opponents on Windward’s schedule. The x-factor, in our opinion, is 6-6 swingman Devin Tillis. The senior is finally healthy and in the best shape he’s been in in quite some time and his improved scoring ability, along with his high basketball IQ and passing ability, will complement his young running mates very nicely. Like Bosco, and most other top SoCal teams, Windward will have its chance to make a splash at the Classic at Damien

The Wolverines, in my opinion, are one of the more underrated teams out West. Sure they lost a big time player in Johnny Juzang, who graduated early and is now a freshman at Kentucky, but Coach David Rebibo brings back four starters from last year’s team that went 21-9. Few SoCal squads will have the ability to compete with Harvard-Westlake inside with 6-foot-10 senior Mason Hooks (committed to Princeton) and 6-foot-8 junior Truman Gettings solidifying the front court. Not only do Hooks and Gettings bring physicality on the inside on both ends, but both are mobile and skilled enough to make things happen on the perimeter, as well. The Wolverines have a steady unit of guards and wings to go along with their big men, too. Senior point guard Spencer Hubbard controls pace and tempo, while 6-5 senior Brase Dottin,  6-3 junior Adam Hinton and 6-3 senior Holden McRae bring intangibles on both ends of the floor. One of the keys to how high Harvard-Westlake can rise will be the development of sophomore Cameron Thrower. If healthy, the 6-foot-3 combo guard could be looked to as a potential starter and secondary ball-handler to Hubbard. The Wolverines will have a chance to play some fellow FAB 50 caliber teams at the Beach Ball Classic Dec. 26-31.

It’s very likely that the Northern California Open Division champion will be either the above-mentioned Sheldon or the Pride of Salesian with Modesto Christian also having a say in that. Salesian is another team that non-California followers of high school basketball might not recognize the names on the roster because of a lack of star ranking power, but the Pride consistently brings the grit and toughness factors which allow it to compete with anybody. Six-foot-6 junior wing Demarshay Johnson, Jr. will be the guy to keep a close eye on for the Pride as he had a breakout summer on the club circuit. Junior Tyler Brinkman, sophomore Austin Johnson, senior Shane Bell and senior Te’jon Sawyer will all be major contributors to a Salesian team that went 31-1 last season. The Pride’s first big regional test will come at the Classic at Damien post-Holiday tournament Dec. 26-30.