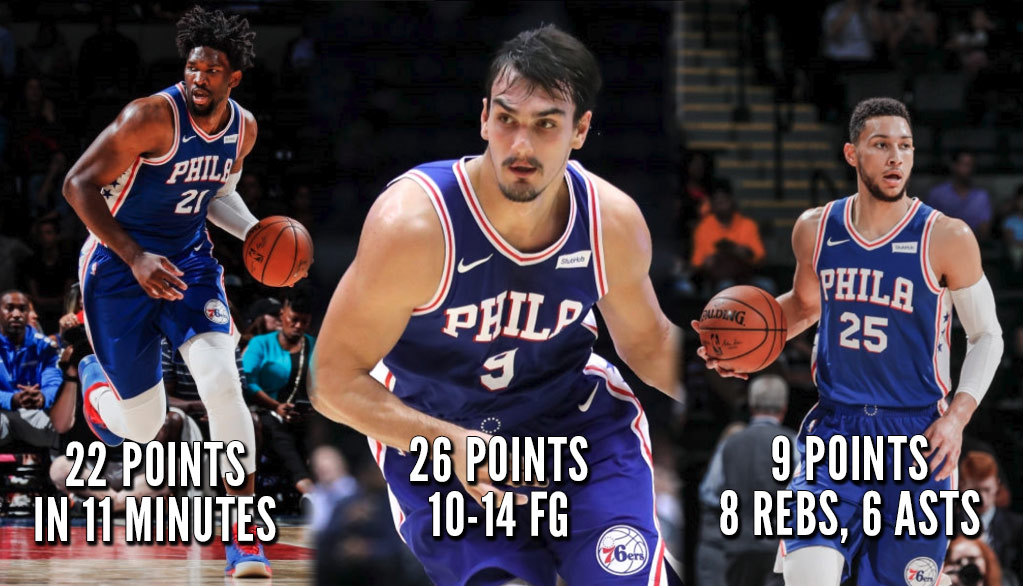 Joel Embiid made his preseason debut on Tuesday and spent 11 minutes toying with the Brooklyn Nets. The short and sweet performance lit up the internet ...(Read more)

Full Highlights of the Philly FEDS (Minus The F): Embiid, Dario & Simmons!

Joel Embiid made his preseason debut on Tuesday and spent 11 minutes toying with the Brooklyn Nets. The short and sweet performance lit up the internet the way his tweets usually do.

Lost in all of the hoopla of what he did is what a few of his teammate did in the 133-114 win: Ben Simmons was nice with 9 points, 8 rebounds, 6 assists and 3 steals in 25 minutes; Dario Saric came off the bench and knocked down of 10 of 14 shots for a game-high 26 points to go with his 9 boards; TJ McConnell dished out a team-high 7 assists off the bench; JJ Reddick was 2 for 3 from three on his way to 18 points; forgotten Jahlil Okafor was also unstoppable in his 11 minutes, scoring 8 points on 4-of-6 shooting.

Missing for the “FEDS” was Markelle Fultz, who is resting his shoulder.