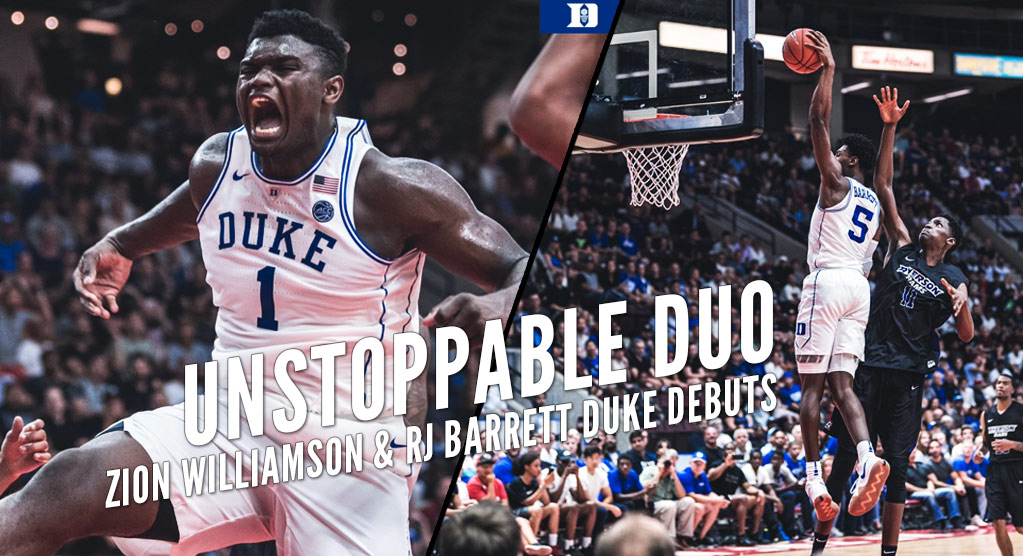 Watching Zion Williamson’s 28-point, Duke debut was like watching a post-injury Larry Johnson with the athleticism of a pre-injury Larry Johnson and the body of Larry Johnson after being exposed to the meteor that made the animals in the Rampage movie so huge. If you remember the converse-wearing Grandmama of the 90s, then you know the LJ 2.0 I just described would be an unstoppable force. That LJ 2.0 might also make die-hard UNLV fans sick to their stomach since he wears the uniform Christian Laettner used to wear.

Much was recently made (especially by me) about Zion’s reported weight of 285 pounds, which is just 10 pounds less than what the late Robert “Tractor” Traylor was at during his backboard-breaking college days. From the looks of his monster rebounds (13), putback dunks and a goaltend that almost resulted in him hitting his head on the backboard, the weight isn’t an issue (for now).

Much was also made about Zion’s shooting. Every time we post a video of Zion dunking — like his free throw dunk with ease from practice — our social timeline is covered with replies like, “but can he shoot?” From the looks of him knocking down three of four three-pointers, he has the confidence to take shots and the ability to make them.

Lost in all of the hoopla about Zion was the impressive performance from teammate R.J. Barrett. The No. 1 ranked high school player (Yes, ahead of Zion) scored a game-high 34 points, which included arguably the best dunk of the night. He did struggle a little with his shot, making just 11-of-29 from the field, 2-of-8 from three and 8-of-14 from the free throw line, but, I’m not concerned about his shot especially since he has the ability to get to the free throw line as much as James Harden does.

Every time Zion Williamson blocks a shot like this I think he’s going to hit his head on the backboard.