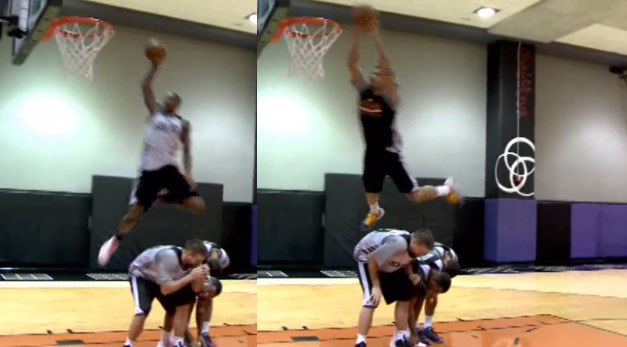 After participating in one of the biggest dunk contest letdowns ever in 2013, Gerald Green made it very clear to Suns.com that he will never, ever, ...(Read more)

After participating in one of the biggest dunk contest letdowns ever in 2013, Gerald Green made it very clear to Suns.com that he will never, ever, ever be in another NBA dunk contest.

“I hate talking about the dunk contest.”

“I’m just so sick of the dunk contest. I’m done with that. That point of my life I’m over with. Last year I tried to do a dunk no one has ever seen before. I wasn’t successful in it. That was the end of that book. I close the book, threw it in the treasure (chest), locked the key, threw it in the ocean and will never see it again.”

“I’ll never be in a dunk contest again. I don’t ever want to be a part of it.”

But he never said anything about private dunk contests in practice!

On Wednesday afternoon, footage of Green pulling off dunks that have never been done in the NBA dunk contest surfaced and went viral for good reason. Green’s dunk exhibition/contest against teammate Archie Goodwin was more spectacular than the over-thought out garbage that the NBA continues to push each year at All-Star weekend.

Check it out. No crowd. No 20 cameras. No wheel. No new rules. No Magic Johnson yelling “the dunk contest is back.” Just a high flyer doing high flying stuff in an empty gym captured on a phone.