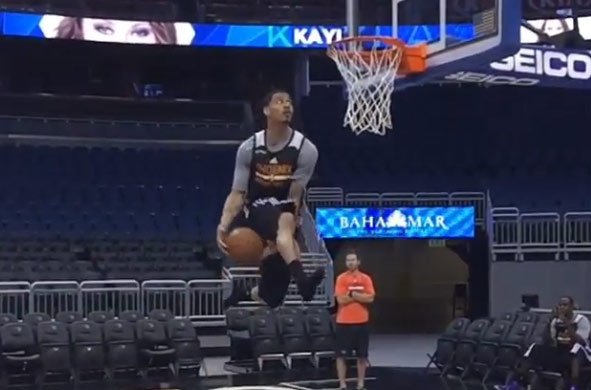 Gerald Green is capable of doing a between the legs dunk off 1 step and without shoes!

One of the most criticized/misunderstood/possibly underrated/whatever dunks in the past decade of the NBA dunk contest was when Gerald Green did a between the legs dunk in his socks back in 2008.  The dunk was met by a lot of head scratching and Magic Johnson repeating “why he do the same dunk.”

Well Magic, he did it again today but this time off just 1 step.  Whether you think dunking in your socks makes a difference or not, you have to respect the fact that Green can do a dunk that JR Rider and Kobe Bryant won a dunk contest with (they did the easier version off 1 leg) without needing a runway.

In my book, it’s a crazy dunk even if Magic doesn’t see the difficulty in it.