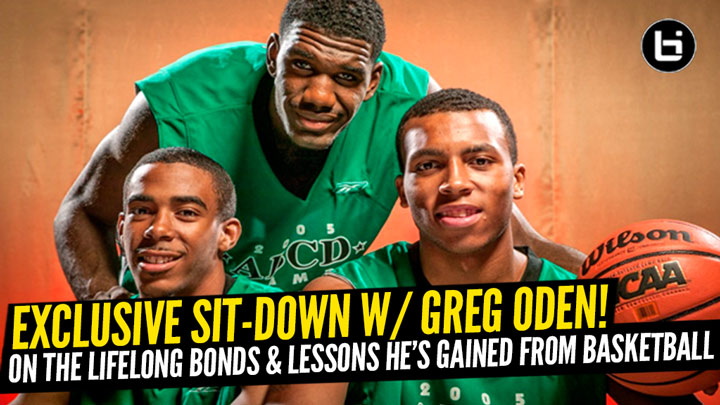 Greg Oden’s basketball career is one that has been well documented. A high-school phenom and a player his good friend Mike Conley says was “the most ...(Read more)

Greg Oden’s basketball career is one that has been well documented. A high-school phenom and a player his good friend Mike Conley says was “the most dominant player I’ve ever played with.” However, he was much more than that and before he was ever a great basketball player with the NBA on the horizon, he became one of Conley’s best friends.

“I remember I used to love to play video and he used to just watch me play.” Conley told us. “He’d come downstairs and walk through this doorframe that was about 6’6″ tall. A few hours a day and a few days would go by and I just remember him hitting the frame with his head. We laughed for a long time about that and that’s really when I knew we’d be great friends for a lifetime. He was always just happy and fun to be around.”

Oden used to live with Conley and his family while playing AAU basketball and training. The two would become the best of friends while living in Indiana and pursuing their goals of playing basketball. Together, along with other teammates like Brandon McDonald, the group formed a bond unlike many.

“They opened up their home to me and let me spend a lot of time with them,” Greg told us on Positionless. “It’s awesome to see when you’re walking through your friends house and your just seeing gold medals, bronze medals up on the wall. I mean Mrs. Conley always took care of me, his brothers and sisters. I just always enjoyed being around the Conley’s. They were great people and great people for me to be around because they helped shape me at a young age, showed me what a great family looked like. And Mike Sr., obviously being a gold medalist, but a great father figure to me (as well).”

Oden’s development as a player and a person seemed to begin when Mike and him were playing on the same team. On Positionless, Oden mentioned that his first basket he ever scored was for the other team. But, as he grew taller, the one difference maker that spurned his interest and gave him extra motivation was when he was able to dunk the basketball.

“I never saw myself getting good after that (scoring for the other team),” Oden told us. “But, I want to say after 7th grade summer, I started dunking. I think once I dunked in the game, something in my head just changed. It was like ‘this was fun, let’s do this all the time.’ That’s where the dominance came. Then, some skills started coming, I started to know my body a little better. After that, it was take off.”

Past dunking, Oden’s career took off shortly after that summer and the rest is pretty well documented. However, his childhood friends like Conley and McDonald, are still his best friends today and he credits them for a lot of his growth and maturity through situations. A father himself, Oden referenced his friends when mentioning raising his daughter.

“You can talk to them and know that they’ve been through that before,” Oden said. “It’s just having that knowledge and having that community to go to when you know a lot of stuff you’re not prepared for. So to have friends who are good fathers as well, you can look at them as examples and come to them with any type of question and they’ll be able to help you.”

Oden, Conley and company formed a bond past the NBA, past basketball. To this day, they still spend time together and meet up whenever they can. Listen to Positionless for the full conversation between Oliver and Oden as they touch on BIG3, life and more.