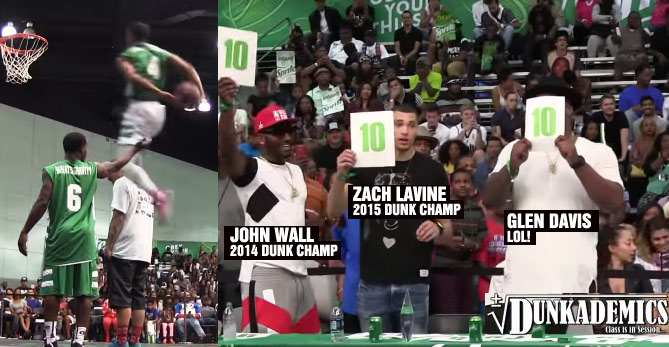 You know how people are always complaining when dunk contests have judges made up of “non-dunkers?” At the BET / Sprite Dunk Contest this past weekend, ...(Read more)

You know how people are always complaining when dunk contests have judges made up of “non-dunkers?” At the BET / Sprite Dunk Contest this past weekend, nobody could complain that the judges didn’t know what they were talking about because the judges were 2014 and 2015 NBA Dunk Contest champions John Wall and Zach LaVine…..and Big Baby Davis (whispering).

The competition was deep with Werm, Michael Purdie, Los, Young Hollywood and defending champ Guy Dupuy, and the winner was once again Guy Dupuy who also  won the ESPN City Slam dunk contest earlier in the month and was seen catching lobs from the ankle-breaking Chris Brown earlier at the BET / Sprite Celeb game.

If you aren’t familiar with Guy, who can also be seen in the Dennis Rodman goes to Korea documentary that aired on Showtime this past weekend, he can do every dunk LaVine can and took LaVine’s behind the back dunk to a new level by jumping over somebody while doing it.

“Zach goes I know you! You the guy I used to watch your dunks when I didn’t even know how to dunk.” – Guy Dupuy