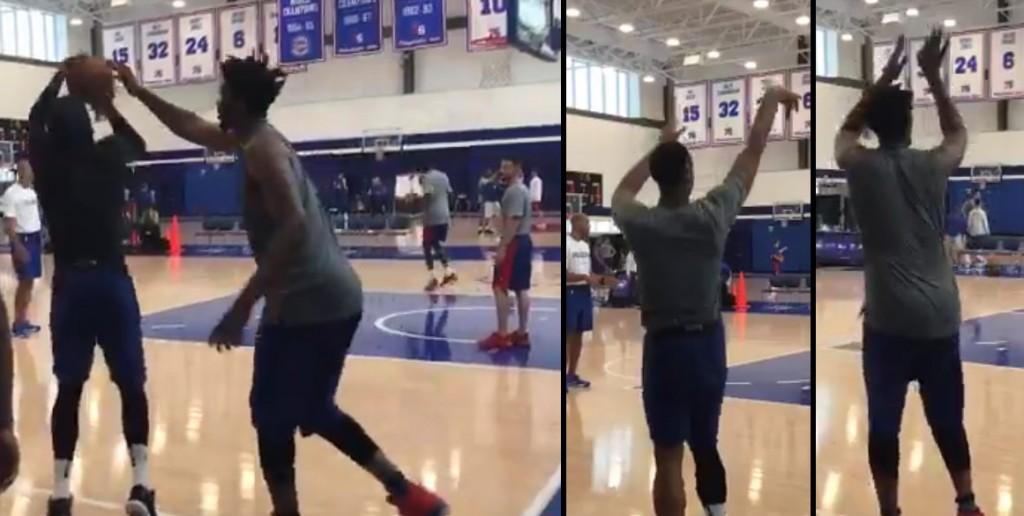 Let me first say I’m not trying to pick on the 76ers — my third favorite team in the league right now. When I shared the ...(Read more)

Let me first say I’m not trying to pick on the 76ers — my third favorite team in the league right now. When I shared the above video of the 76ers struggling to hit a shot (even a freaking layup), a lot of people replied with comments about how much Philly is going to suck this year. Saying they are going to suck just because of a selected clip of 4o seconds of awful shooting is the equivalent of saying a player is going to have a great season because of a clip of them knocking down shots for 40 seconds; I can recall plenty of clips of guys scoring like Michael Jordan in practice and then watching them score like DeAndre Jordan once the season started.

With all that said, here’s a minute long clip of Joel Embiid, Jahlil Okafor, Richaun Holmes and Amir Johnson taking threes in practice.

If we are going to jump to extreme conclusions from this clip, Hoodie Amir needs to be in the 3-point contest, Joel Embiid has no outside shot and Jahill Okafor — should never shoot the ball again. FYI: Amir made 27 of 66 threes (41%) last season after making a total of nine threes in his first eight seasons; Embiid made 36 of 98 (37%) of threes last season, including a four for four game; Okafor is one for six from three in his first two seasons in the league while making 51% of his field goals, so maybe he should stick to the paint.