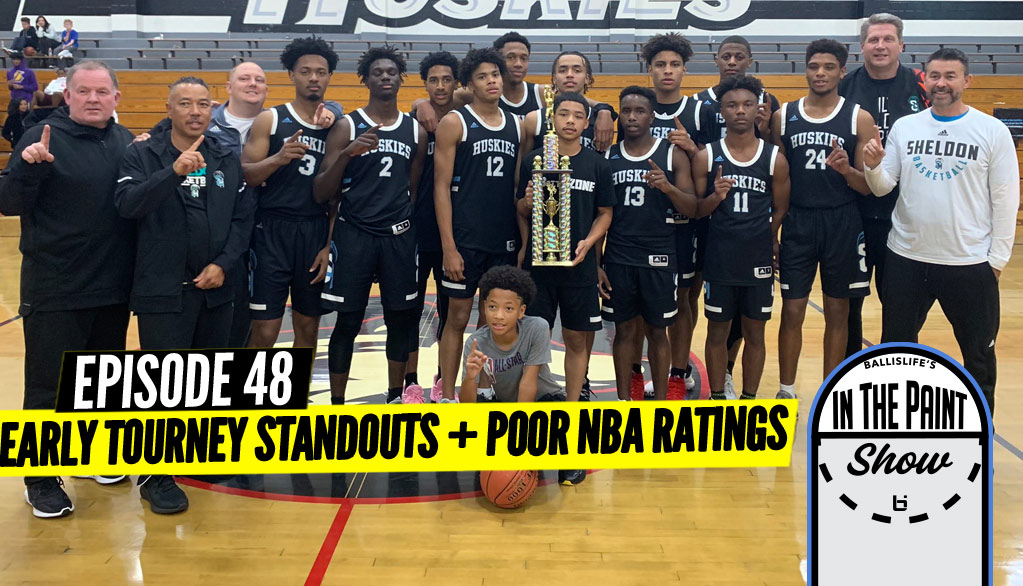 In Episode 48 of our "In The Paint" Show, Ron and Dev go hard on some early tournament and showcase results around the country, dish on NBA ratings and the USC football situation and how it relates to reporters striving to be first instead of accurate.

“In The Paint” Podcast GOES IN on NBA TV Rantings, Big HSBB Games!

In Episode No. 48 of our “In The Paint Show,”  co-hosts Ronnie Flores and Devin Ugland go hard on some of the early tournament and showcase results around the country and dish on NBA ratings and the USC football situation and how it relates to reporters striving to be first instead of accurate.

Dev goes in on how fans consume content and how that has changed over the years and how it has contributed to a 20 percent drop in NBA TV ratings. What is the main reason for the drop? Injuries to star players and the decline of the Golden State Warriors? Anthony Davis and Kawhi Leonard playing for West Coast teams? Consuming of NBA highlights on social media and the expense of watching full games?

With social media and the gradual decline of traditional newspaper coverage and journalism standards,  reporters are in such a hurry to be “first” with breaking news that sometimes accuracy takes a backseat. That appears to be the case with USC football coach Clay Helton, as it was announced on December 4 that he would be retained after social media posts from “reporters” surfaced over the weekend that he would be released of his duties. What can be done to change this reckless reporting and why do people continue to uses these “sources” of information?

Ron and Dev also go hard in the paint on the updated FAB 50 National Rankings and how the results from the Thanksgiving HoopFest in Dallas (Nov. 29-30), the BattleZone Tournament in SoCal and other tournaments affected the first regular season update. Preseason No. 21 Rancho Christian (Temecula, Calif.) fell twice at the BattleZone Tourney and is the highest-rated among six teams to drop from the preseason poll. Can Rancho Christian bounce back? Will the Santa Clarita Christian team give No. 6 Sierra Canyon (Chatsworth, Calif.) just as tough a game?

Speaking on Sierra Canyon, California’s top-ranked club played at American Airlines Arena in front of over 12,000 fans when it defeated No. 25 Duncanville (Duncanville, Texas), 66-63. Based on how easily No. 2 Monverde Academy (Montverde, Fla.) defeated Texas’ top-ranked club, can Sierra Canyon play with any team in the country? Can Sheldon (Sacramento, Calif.), which won the BattleZone Tourney, stay with the Trailblazers this year? Is Sheldon, the highest ranked newcomer at No. 36, better than it was last season?

Speaking of Sierra Canyon, many of the 12,000 plus fans wanted to see Bronny James and the hoopla surrounding this Sierra Canyon team. Will Bronny one game this season play in front of more fans (12,819) than his dad did when his St. Vincent-St. Mary (Akron, Ohio) team visited SoCal in 2003 to take on state power Mater Dei (Santa Ana, Calif.)? Or will the novelty wear off?