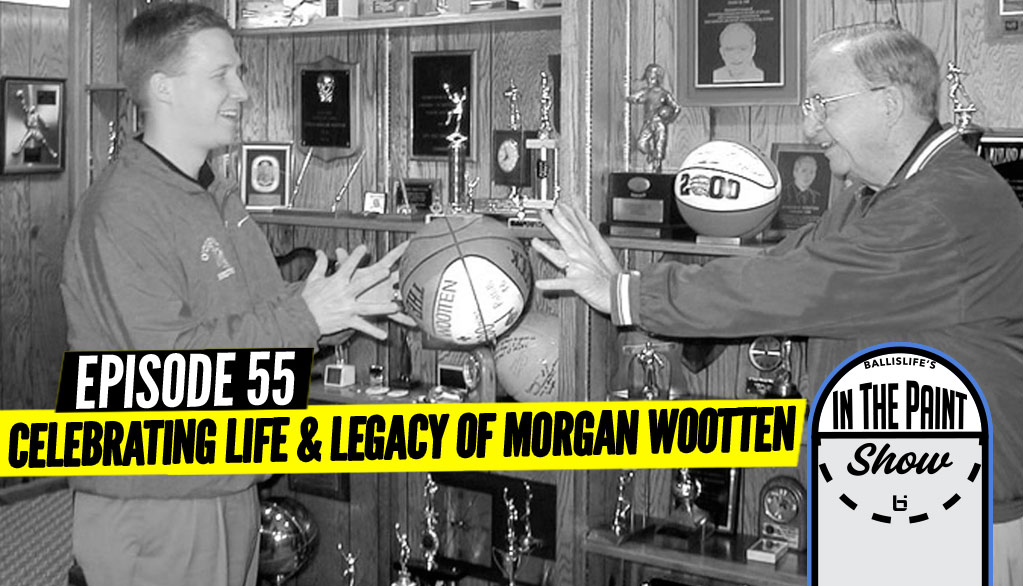 In Episode No. 55 of our "In The Paint Show,"  Ron and Dev, along with three special guests, celebrate the life of Morgan Wootten, arguably the most well-known and respected high school coach ever. Wootten's influence still resonates today and ties into Episode 54, as elite high school players form a bond through national events such as the ones Kobe Bryant played in back in 1996.

“In The Paint” Podcast: Salute To Morgan Wootten!

In Episode No. 55 of our “In The Paint Show,”  co-hosts Ronnie Flores and Devin Ugland celebrate the life of arguably the most well-known and respected high school basketball coach of all-time: Morgan Wootten, who coached at DeMatha Catholic (Hyattsville, Md.) between 1957 and 2002. The legendary coach passed away on January 21 at 88. Wooten was inducted into the Naismith Hall of Fame (while still an active high school coach) in 2000.

We originally had planned to honor the legacy of Wootten last week, but then the tragic aviation accident that killed Kobe Bryant along with seven other people on January 26 changed those plans. Last week’s podcast was dedicated to Bryant’s rise to fame and legacy and this week we tie in his bond with his Class of 1996 mates (two that we had on as special guests) with the legacy of Wootten, whose notoriety, reputation, and success as a high school basketball coach made him the choice of Sonny Vaccaro (another special guest from Episode 54) and Bob Geoghan (one of this week’s guests) to coach in their first national all-star games. Those national all-star games eventually made high school basketball stars household names and helped elite players become close before every reaching the NBA.

Geoghan also had Wootten serve as the chairman of the Mcdonald’s All-American Selection Committee when the East-West format began in 1978. Wootten’s influence also convinced retired UCLA coach John Wooden to serve as chairman of the prestigious game after McDonald’s original inquiry was quickly rebuffed by the legendary college coach.

Wootten’s influence reached beyond the walls of the Washington, D.C. metropolitan area, as his DeMatha program was the first with a true nationwide reach after its legendary win over Lew Alcindor-led Power Memorial of New York in 1965. DeMatha Catholic helped put high school basketball on the national map and was the first program to go on expense paid-trips across the country in the 1970s, a prelude to the elite high school scene now. Wootten compiled a 1,274-192 career mark, his program won five mythical national titles and his undefeated 1978 team went on a tour of Brazil.

Wootten’s second unbeaten team in 1990-91 featured senior Mike Jones, another special “In The Paint” guest this week who succeeded him as head coach at DeMatha Catholic, where he is in his 18th season. Jones talks about how coach Wootten’s teachings resonated more with life than actual basketball game-play, what made playing for DeMatha so special and a great opportunity to attain a college scholarship, and how the mood for the celebration of coach Wootten’s life changed the day Bryant died. For many of Jones’ players and even his own kids, the former Los Angeles Laker superstar had as big or even greater impact than Wootten.

Our third special guest for Episode 55 is Marc Stern, who covers DMV basketball on a daily basis for CapitolHoops.com. Stern gives some perspective from the lens of a media member on just how big of a figure coach Wootten is in Washington, D.C., and what makes playing in the Washington Catholic Athletic Conference (WCAC) so special. Stern also talks about Bryant’s impact on Wootten’s wake and funeral and a memorable speech by keynote speaker James Brown, a former DeMatha player who is a well-known sportscaster.

2:25: Ronnie and Devin on the worldwide memorials for Kobe Bryant, Gianna Bryant and the seven others lost in the tragic helicopter accident.

19:30: Current DeMatha coach Mike Jones on the impact coach Wootten had on him as a person, coach and player.

41:10: Capitol Hoops founder Marc Stern on Morgan Wootten’s lasting impact in the DMV area and beyond.

Geoghan goes in depth on how his Capital Classic got off the ground, the risk he took in starting it and how he pitched McDonald’s to become the title sponsor. Those prestigious all-star games, along with the Roundball Classic Vaccaro started in 1965, helped bring the high school basketball community closer and make its stakeholders more influential, as was clearly highlighted in the podcast tribute to Bryant (listen to Episode No. 54 below).

Our last two episodes cover plenty of topics that relate to the core of the history of high school and grassroots basketball. They are a bit longer than our previous episodes, but well worth the listen! To learn more about our hosts, Ronnie Flores and Devin Ugland, and to get more information about what “In The Paint” is all about, check out our intro below!