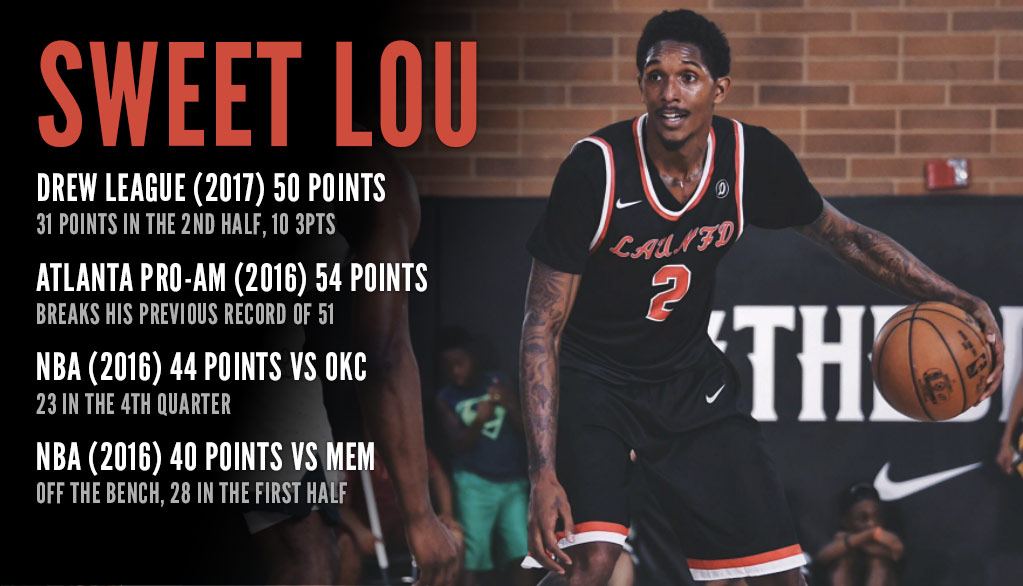 Usually around this time each summer I’m posting about Lou Williams breaking his own scoring records at the Atlanta Pro-Am. On Sunday, the new Clipper made ...(Read more)

Usually around this time each summer I’m posting about Lou Williams breaking his own scoring records at the Atlanta Pro-Am. On Sunday, the new Clipper made his Drew League debut with former Rocket teammate Bobby Brown’s LAUNFD team and ended up dropping 50 points with 10 threes in a 46-point win! 31 of those 50, which is a new Drew League debut record, came in the second half.  Teammate Bobby Brown also knocked down 10 threes (four short of the Drew record) on his way to 35 points.

50 is also just four away from the Atlanta Pro-Am record he set last summer. The previous record was 51, which was also set by Lou and followed by a 49-point performance.

In between the two summer games, the former Sixth Man of the Year had some red-hot performances during the NBA regular season, including a season-high 40 off the Lakers bench against the Grizzlies. 28 of those 40 came in the first half and it was the first time in 15 years a 30-year old scored 40+ off the bench; Former Laker and current Grizzlies assistant coach Nick Van Exel was the last to do it.

Williams’ career-high came against the Thunder in 2016, when he went off for 28 4th quarter points on his way to 44.

“I was just making shots,” Williams said after the game “Down the stretch, I made one, I made two, get some free throws. Things kind of snowballed from there. My approach was the same as it always is.”

And that approach is “get buckets!”