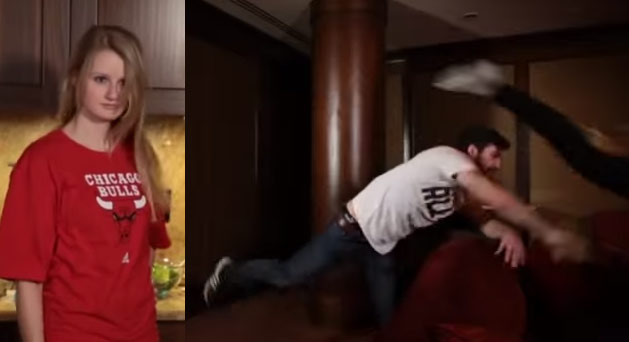 One week after the Houston Rockets fired their social media manager for a controversial tweet showing an emoji of a horse followed by a gun and ...(Read more)

One week after the Houston Rockets fired their social media manager for a controversial tweet showing an emoji of a horse followed by a gun and the words “”Shhhhh. Just close your eyes. It will all be over soon,” we have people calling for the heads of the Cavs people behind the above Playoff skit.

The video, which is a parody of the famous scene from the film Dirty Dancing and inspired by the recent United Healthcare commercial called “Our Song,” is being accused of promoting domestic violence.

Do I think the video, which shows a Cavs fan tossing his girlfriend who is wearing a Bulls shirt, was a horrible decision by the Cavs? Yep. Do I think it’s promoting domestic violence? Nope.  Do I think people are a little too over-sensitive nowadays about failed attempts at humor on social networks like this and the Rockets tweet? Yes!  Do I wish people would be more concerned and vocal with all of the videos showcasing violence against women on trash sites like WSHH and Mediatakeout. Hell yes!

What’s going to be real interesting now is who the Cavs make the scapegoat. This video went through a lot of heads, from conceptualization to story boarding to casting to filming to editing to rendering to showing at the arena but I have this feeling the Cavs PR people are going to issue a template apology and probably punish one or two individuals. 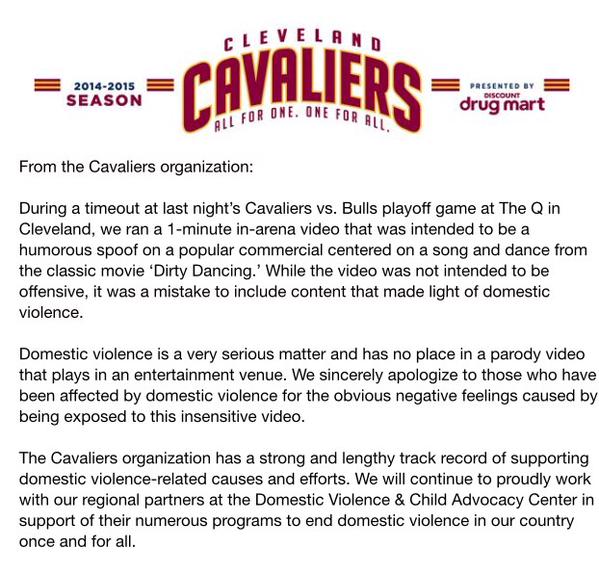 I was hoping for an apology for the acting too. Oh well, if you want to see a funny but edgy video about the Cavs and “fitting in” then go to the 1:27 mark of this brilliant video by Bleacher Report.