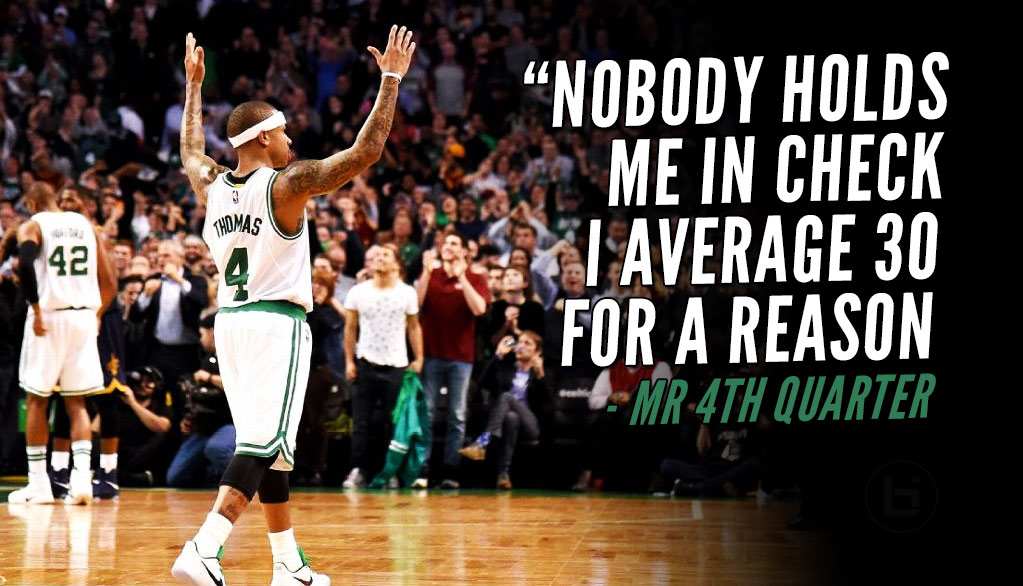 Mr 4th quarter, Isaiah Thomas, only had one field-goal in the fourth quarter against the Cavs on Wednesday night. That one bucket was a clutch 3-pointer that ...(Read more)

Isaiah Thomas After Beating Kyrie And The Cavs, ‘Nobody Holds Me In Check’

Mr 4th quarter, Isaiah Thomas, only had one field-goal in the fourth quarter against the Cavs on Wednesday night. That one bucket was a clutch 3-pointer that gave the Celtics a two-point lead with 49 seconds left in regulation. 20 seconds later, he connected on a pair of free-throws and after a pair of missed shots by Kyrie Irving and a miss from Deron Williams, the game was over and the Celtics had a 103-99 victory.

After the game, while a reporter was asking a question to Thomas and said, “they kind of held you in check,” Thomas interrupted and explained why that statement was offensive.

“Nobody holds me in check. Don’t say that,” Said Thomas, who finished with a game-high 31 points. “I made plays. I average 30 points for a reason. I made plays. They double me, I pass it to Jae, he hit a shot. I pass it to Avery. I believe in my teammates. Then I hit a 3-pointer where they miscommunicated on their coverage. My job every day, no matter what the defense throws at me, is to make plays, score the ball, and I try to do that to the best of my ability.”