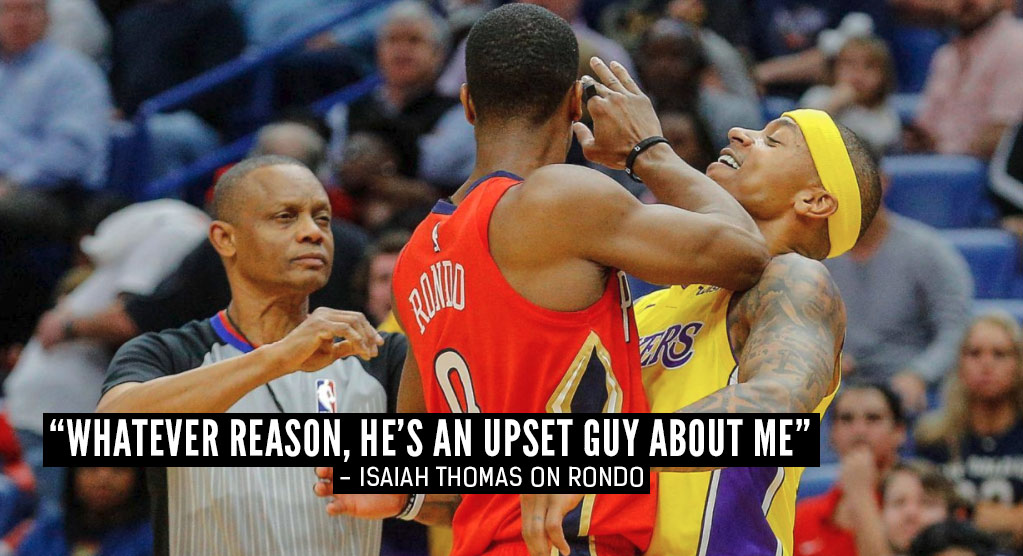 The IT stop in LA has been a fun and interesting one so far. After putting up season-highs and almost season-highs across the board in his ...(Read more)

Isaiah Thomas Talks About Rajon Rondo After Their Altercation & Ejections

The IT stop in LA has been a fun and interesting one so far. After putting up season-highs and almost season-highs across the board in his Lakers debut, Isaiah Thomas was ejected after just five minutes in his second game.

“I got hit in the face three times, and the third time I got hit in my face, I reacted and tried to tell the refs, ‘Are you guys going to control this?’ Said Thomas, who feels his technical fouls should be rescinded.

Here’s what he had to say about Rondo, who had an issue with the Celtics honoring Thomas on the same night as Paul Pierce and doesn’t think the Celtics should honor players that didn’t win a championship.

“Whatever reason, he’s an upset guy about me. I don’t know what it is, but it’s fine. He kept bringing the tribute up, when I was the one that shut the tribute down. I’m far past that. … For me to be ejected was uncalled for.”

Thomas on his history with Rondo.

“I mean, my team beat his team in the playoffs last year. Maybe that is what’s wrong. I don’t know. There’s nothing. Nothing should’ve made that escalate like it did. He already had his agenda written down right when I checked into the game. It was obvious. He picked me up full court, trying to be physical.

“I don’t know what was going on with him. I don’t know why I got thrown out. I don’t want to comment too much on it. … It was obvious what was going on. He was being too aggressive for whatever reason, and he also hit me in the face three times. At some point, as a human, if no one is going to protect me, I got to protect myself, and that is when I spoke up and got upset. I hope the NBA figures something out with that, because it was wrong for me to be ejected.”

Here’s what Coach Luke Walton (also ejected in the game) had to say about Thomas.

Rondo declined to speak about the incident after the game.

“You want to keep making it a story. It’s not nothing. Next question.”