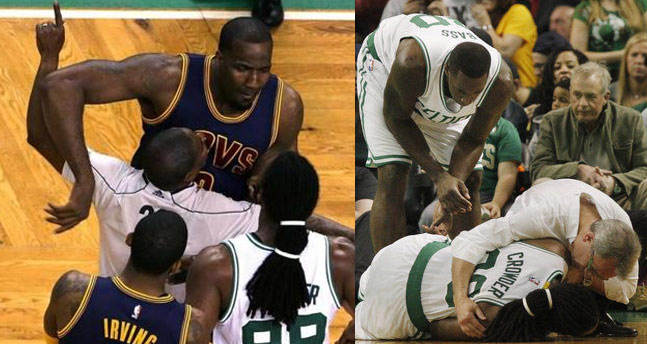 GM4 between the Cavs and Celtics started off ugly and physical with Kevin Love leaving the game in the first quarter with a dislocated shoulder – ...(Read more)

Jae Crowder Gets Thrown To the Ground by Kendrick Perkins, then later hit in the face by JR Smith

GM4 between the Cavs and Celtics started off ugly and physical with Kevin Love leaving the game in the first quarter with a dislocated shoulder – thanks to what Love thinks was an intentional non-basketball play by Kelly Olynyk. Then with a couple minutes left in the first half, Kendrick Perkins leveled Jae Crowder with a screen/push which caused a mini-scuffle between the two teams.

Both Perkins and Crowder were given techs for the altercation and Perkins was also given a flagrant-1.

Then in the 3rd quarter, Crowder was once again involved in some rough play when he was hit in the face by J.R Smith. Smith was given a flagrant-2 and ejected for the hit and said after the game that the strike was unintentional and he’s “nervous as hell.” about his upcoming punishment.

The Inside The NBA crew discussed the physical plays from the game and Charles Barkley said he think Smith should get a 5-10 game suspension. That seems a little heavy and unlikely but with Love being out for probably 2+ weeks, losing Smith for any amount of time will really hurt the Cavs.