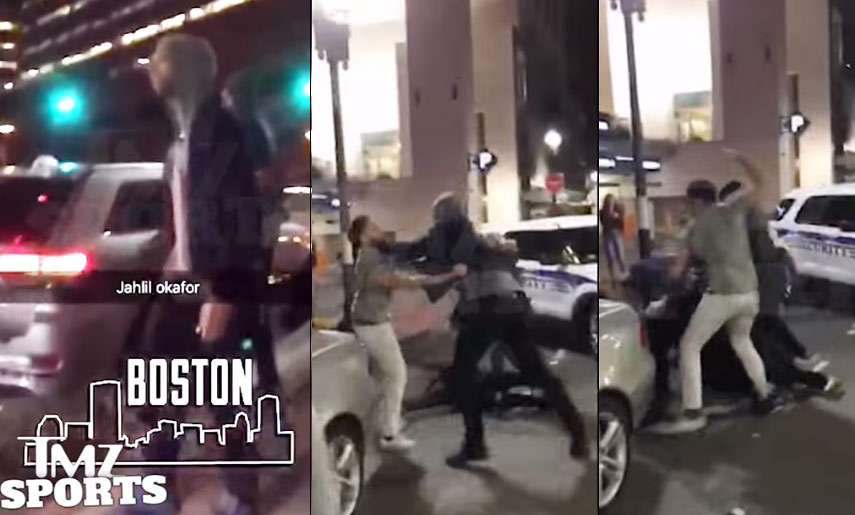 19-year-old Okafor was screaming at the other man, “We got money you broke ass n**ga.”

A scuffle ensues — people tried to hold Okafor back — but then he escapes and swings wildly at another man … connecting … and sending him flying to the ground.

In the melee, Okafor tumbles to the ground and a man in a green jacket tries to punch the 6’11” superstar in the back of the head.

We’re told everyone got up and fled the scene and no arrests were made.

We’re told the altercation began because one of the men in the other group yelled at Jahlil, “The 76ers suck.”

The truth is the 76ers do suck. And videos like #SaveJahlil and assholes like the guy Jahlil punched are going to surface and get under his skin.

“Apparently, they said: ‘The 76ers [stink], and you guys are all losers. You’ll never win a game,’ ” the source told ESPN. “I was around the corner when it happened. I saw him a minute after he knocked the dude out. I think the guy was just talking [expletive], saying the Sixers [stink].”

I’m not excusing Jahlil’s behavior but I can see why he’s so frustrated. He’s a 19 year old kid who won a NCAA champion at Duke, a championship, co-MVP award at the McDonalds game and Mr Illinois basketball in high school and many thought should have been the #1 pick in the NBA draft.  Now he’s putting up empty numbers on the worst team in the league. They are so bad they aren’t even considered bad – they are considered a joke.  And since Jahlil is the best player on the team, he’s going to be the face or butt of most of the jokes and that’s not going to change anytime soon.

Although the man punched by Jahlil has remained unidentified and not came forward to the Police yet, Jahlil will be punished – in the form of criticism and possibly by the team – for this unfortunate mistake and  hopefully learned a lesson and will just ignore the ignorance next time.