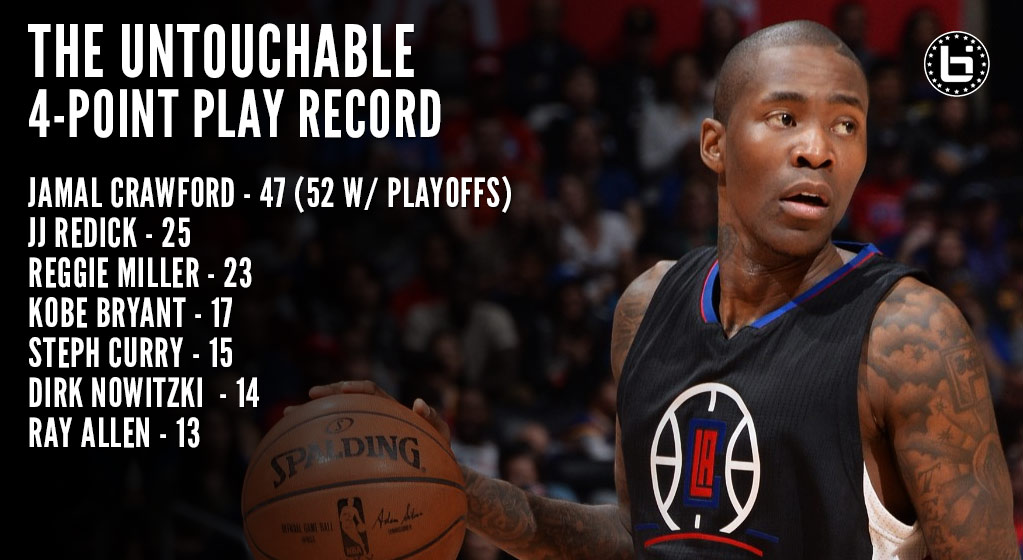 When I think of untouchable NBA records in the post Wilt era, I don’t think of Kobe’s 81, although I don’t see anybody ever breaking it; I ...(Read more)

When I think of untouchable NBA records in the post Wilt era, I don’t think of Kobe’s 81, although I don’t see anybody ever breaking it; I don’t think of any Steph Curry 3-point record, because I think Steph will just break it a year after setting it; I think of John Stockton’s assist record and Jamal Crawford’s 4-point play record. Obviously Jamal’s knack for hitting 3s after a foul isn’t going to be as celebrated as having 3,715 more assists than Jason Kidd (#2) and 5,471 more than Steve Nash (#3) but the distance between Jamal and the other NBA greats on his list is just as, if not more ridiculous.

On Saturday against Steph Curry and the Warriors, Jamal Crawford connected on his 47th (52 if you count the playoffs) career 4-point play. 47 doesn’t sound that crazy or untouchable right?  Well, it does when you say he has more 4-point plays than the entire Boston Celtics franchise and more than twice as many 4-point plays as #2 on the list.

What makes this Crawford’s record so impressive is the majority of the guys below him are GOAT shooters and future Hall of Famers with at least 18 seasons on their resume. The exceptions are JJ Redick (10) and Steph Curry (7).

So you are probably doing the math right now and wondering what it will take for JJ or the Chef to pass Crawford on this list. That’s tough to do, even when looking at averages, because it’s like saying how many games will a dunker have to play to posterize X amount of players.  But for kicks, I did the hypothetical equation for you.

Curry averages a 4-point play every 31 games. So if he maintains that average and Crawford never makes another, then Curry would have to play approximately 991 more games. Do you see Curry (and those ankles) playing 12 full seasons? Nope (Draymond Green voice).

As for 10-year vet JJ, he’s averaging a 4-point play every 25 games and would need approximately 550 games (almost 7 full seasons) to catch his current teammate. That’s not happening, even if he did, Jamal Crawford is still playing and routinely putting up 20 point games, meaning, he’s not retiring anytime soon, meaning, he’s not done adding to his untouchable record.

Worth a bonus shout out in this conversation is Kobe Bryant. For some reason, he’s been a 4-point terror this season. He has 4 (1 per 10 games) so far and that’s twice as many as any season-high. 4 is also the total amount of 4-point plays in Kobe’s previous 6 seasons.  Now all he has to do is average a little more than 1 a game for the rest of the season and he will retire as the 4-point King!

JAMAL TALKS ABOUT THE RECORD

Go to the 33:60 mark of the following documentary about Jamal Crawford