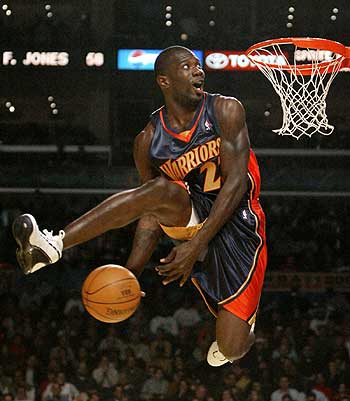 I don’t want to talk about Jason Richardson as if he’s officially retired but news out of Philly is the 33 year old 2x Dunk Champion, still recovering from a left knee injury, suffered a stress fracture in his right foot which will probably cause him to miss this season.

“He is busting his tail to get back in shape and play again,” Brown said. “He is not going down easy. He is not going to retire easily. He continues to work, to try and get ready. It is a setback.”

Richardson missed last season and only played 33 games in 2012. This season is also J-Rich’s last with his current contract and speculation is that he is contemplating retirement.

Hopefully we get another couple seasons and highlights out of Richardson but even if we don’t, he’s provided us with some of the best highlights over the past 14 years – from putting on a show against Vinsanity and Team USA in 2000 to pissing off Carlos Boozer in the rookie game to throwing down enough dunks that we actually have a Top 100 Dunks montage.