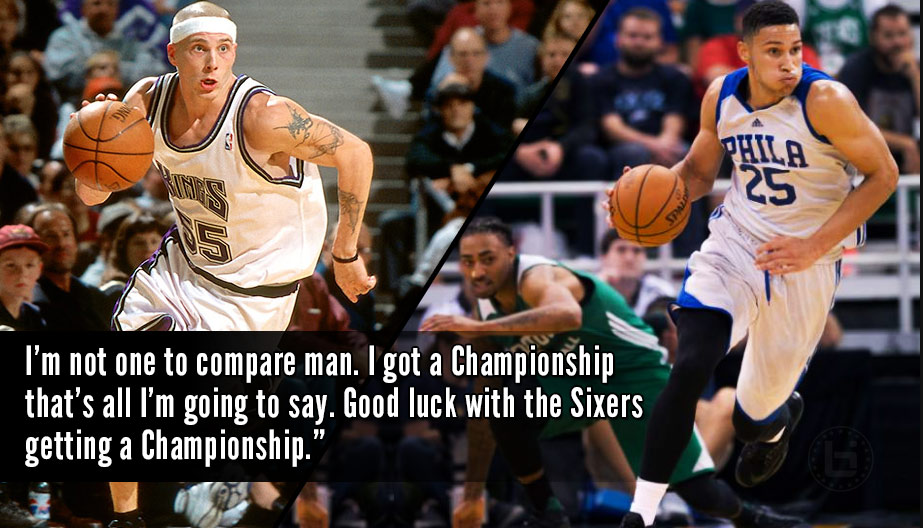 After the Pedro’s Posse team was eliminated in the $2 million Basketball Tournament, Jason Williams had some very quotable sound bytes about the tournament, Ben Simmons (who was in attendance), KD going to the Warriors and Charles Barkley during the post-game conference.

Via Mike Ortiz‘s post on Did You See That

Q: With Ben Simmons being here, how do you feel his passing skills relate to yours?
Jason Williams: I’m not one to compare man. I got a Championship, that’s all I’m going to say. Good luck with the Sixers getting a Championship.

Q: Did The Tournament live up to your expectations?
Jason Williams: Man it definitely lived up to my expectations. Anytime I can play basketball like I said earlier is great. And to put $2 million on the line too, that’s just icing on the cake…I mean I would rather just win the tournament than get the $2 million. I’m playing for the win. The $2 million is just coming along with it.

Q:  Jason, being in Kevin Durant’s shoes would you’ve gone to the Golden State Warriors too?
Jason Williams: Ah man, you can’t put me on Kevin Durant’s level first and foremost. If I was Kevin Durant and that’s what I wanted to do, then that’s what I would’ve done. I wouldn’t have made a decision based on anybody else. Because it seems like he’s done that for 8 or 9 years now. You know you’ve gotta take care of yourself and make yourself happy at the end of the day. I mean all these guys [Charles] Barkley and them talking about oh they wouldn’t have done it, well they was never free agents back in the day…like they didn’t have the choice. Nobody wanted his ass [Barkley] on their team because he was a loser. So that’s what I think about that.

Q: Jason, do you hope to get back into the NBA or College basketball at any capacity anytime soon, as far as like coaching?
Jason Williams: You know man, I’m one irresponsible 40-year old. So coaching is out the window…no way. You know I could maybe be an assistant somewhere. But if I’ve got a responsibility to be somewhere at like 3 o’clock tomorrow for practice and someone calls me to go to Augusta and play golf, I’m going to go play golf. So I can’t have that responsibility. So no. But as an assistant, I’ll be there to help. It might be Tuesdays and Thursdays but other than that, I’m good.

Q: Are you guys going to be back next year?
Jason Williams: Does a fat hog fart?

I know none of the copycat websites are going to give us a tip but I am asking you all to please credit Mike and his site: DYSTNOW. Thanks, now enjoy the best Jason Williams mixtape ever.