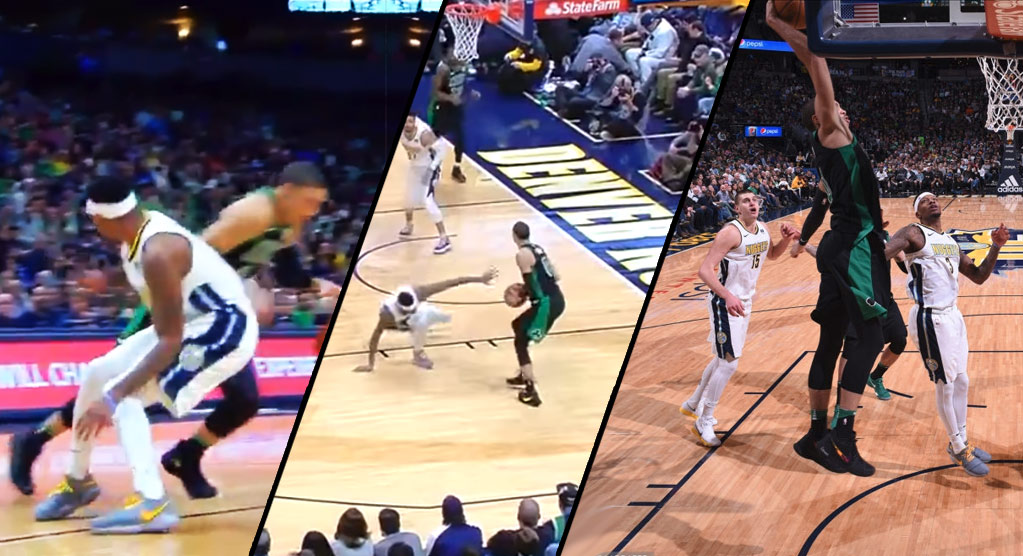 Not one but three for Jayson Tatum! I’m not talking about girlfriends (that’s two), I’m talking about the three highlights he had against the Denver Nuggets’ Torrey Craig, ...(Read more)

Not one but three for Jayson Tatum! I’m not talking about girlfriends (that’s two), I’m talking about the three highlights he had against the Denver Nuggets’ Torrey Craig, who had a night he probably doesn’t want to remember.

The first highlight came late in the opening quarter, when he hit Craig with a behind the back dribble before hitting a tough layup.

The second highlight came midway in the third, when he showed Craig his fancy footwork that led to Craig taking a seat on the floor to watch Tatum’s pretty jumper.

Then with 20 seconds left in the third quarter, Tatum blew by Craig and threw down a one-hand dunk to tie the game at 80-80 (1:55 mark of the following video).

If being on multiple Jayson Tatum highlights wasn’t bad enough, Craig had a potential game-winning shot called off (3:04 mark in the previous video; they should have passed it to him since he was wide open). Nuggets lose by one and Craig finishes with 0 points, 4 rebounds and 0 assists in 14 minutes of action.

I heard an actor once say the worst day on a movie set is better than any day off of one. So as bad as this day probably felt for the undrafted Craig, he’s in the NBA now and has shown he belongs — like he when he put up 14 points on 5-of-5 shooting against the Thunder last month.

As for Tatum (20 points, 8-13 FG, 2-4 3PT, 6 rebounds and 4 assists in 33 minutes), he not only belongs in the league, he’s going to be a star in it. And I’m not just going to say it’s because of this game because I think Tatum was looking for revenge on the Nuggets after what Trey Lyles did to him earlier in the season.