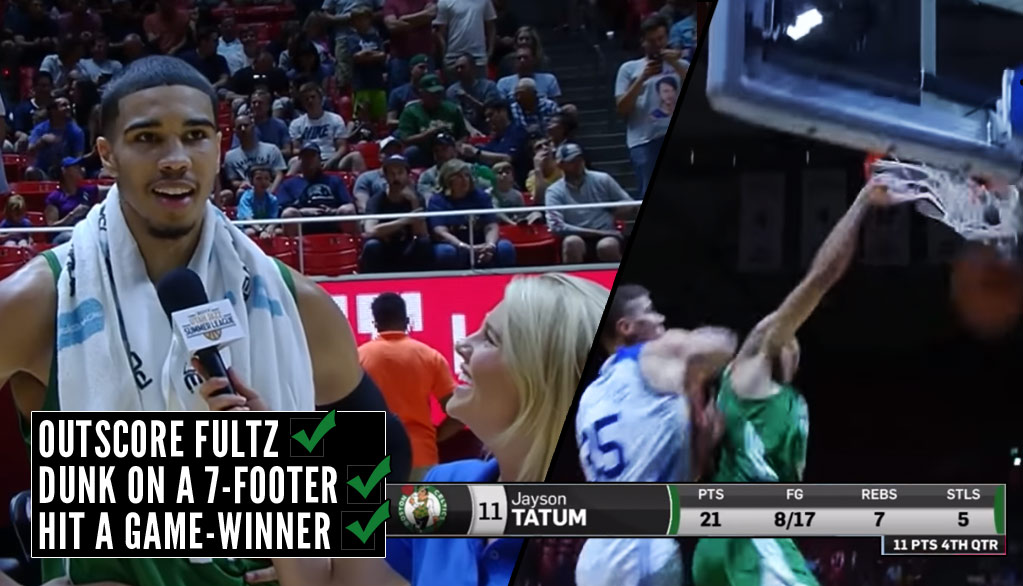 I can’t recall the last time hoop fans got so excited over a Summer League game. On Monday night, the internet and hoop fans were going ...(Read more)

I can’t recall the last time hoop fans got so excited over a Summer League game. On Monday night, the internet and hoop fans were going crazy over the duel between the 76ers #1 pick Markelle Fultz and the Celtics #3 pick Jayson Tatum, who Celtics GM Danny Ainge said he would have still taken with the #1 pick before trading it. Do I believe him? No! Do I believe it would have been a mistake if he did? No!

The 19-year old Tatum had 21 points on 8 of 17 shooting with 7 boards, 3 assists and a game-high 5 steals in his impressive debut that ended with him knocking down a game-winning shot.

“I was really just trying to give him the ball and get everyone out of his way,” said Celtics coach Jerome Allen. “Just like I drew it up, and I didn’t draw up anything. It was a big shot. Not easy.”

Besides the shot of the night during his 11-point fourth quarter, he also had the dunk of the night in the second quarter, when he drove past his defender and threw down a 1-hand dunk over Kaleb Tarczewski.

The one negative about Tatum’s performance was him missing 4 out his 5 shots from three but I wouldn’t worry too much about his shooting. I know he’s wide-open in the following practice videos but knocking down 18 in a row is impressive even in pop-a-shot.