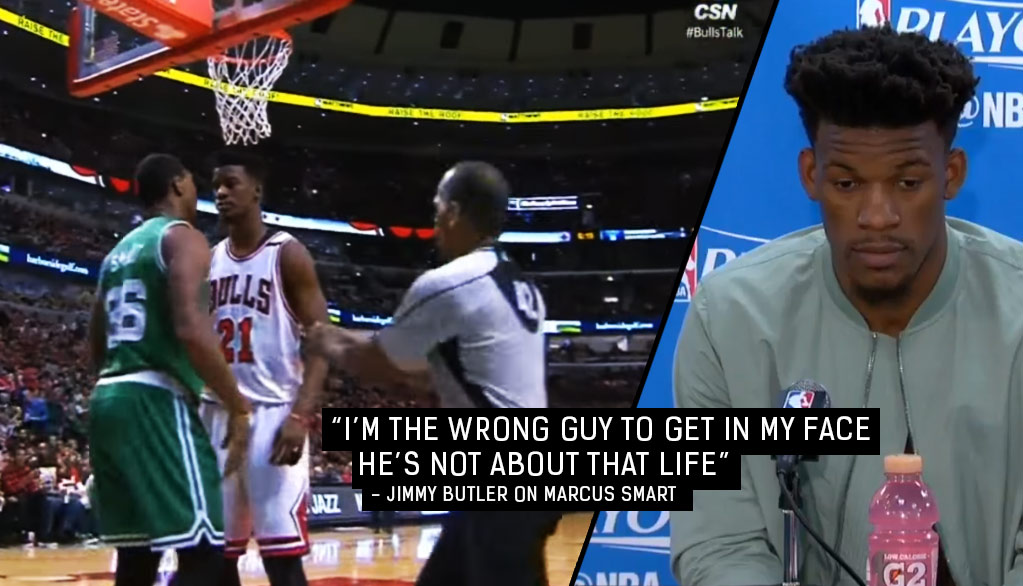 Down by almost 20 early in the 2nd quarter of Game 4, a frustrated Jimmy Butler got into a “2017 NBA fight” with Marcus Smart, which ...(Read more)

Jimmy Butler Gets Into It With Marcus Smart, Ethers Him During GM4 Postgame

Down by almost 20 early in the 2nd quarter of Game 4, a frustrated Jimmy Butler got into a “2017 NBA fight” with Marcus Smart, which led to a bunch of hold me backs, guys whispering sweet nothings to each other and a pair of techs.

After the nine-point loss, Butler had some memorable sound bytes about Smart and even complimented his acting — just not in the way he compliments his buddy Mark Wahlberg.

“As far as the Marcus Smart situation goes, he’s a great actor,” said Butler, who had a team-high 33 points and nine assists. “Acting tough, that’s what he does. But I don’t think he’s about that, and I just don’t think — I’m the wrong guy to get in my face. He needs to take it somewhere else, because I’m not the one for that.

“That’s the first time. The last time, too. We’re not going to sit here and get in each other’s faces. He’s not about that life, so he’s calming down.”

I know Jimmy has had a tough childhood but he might want to google Marcus Smart to learn a little more about his tough life. With that said, the flop-master is a great actor.