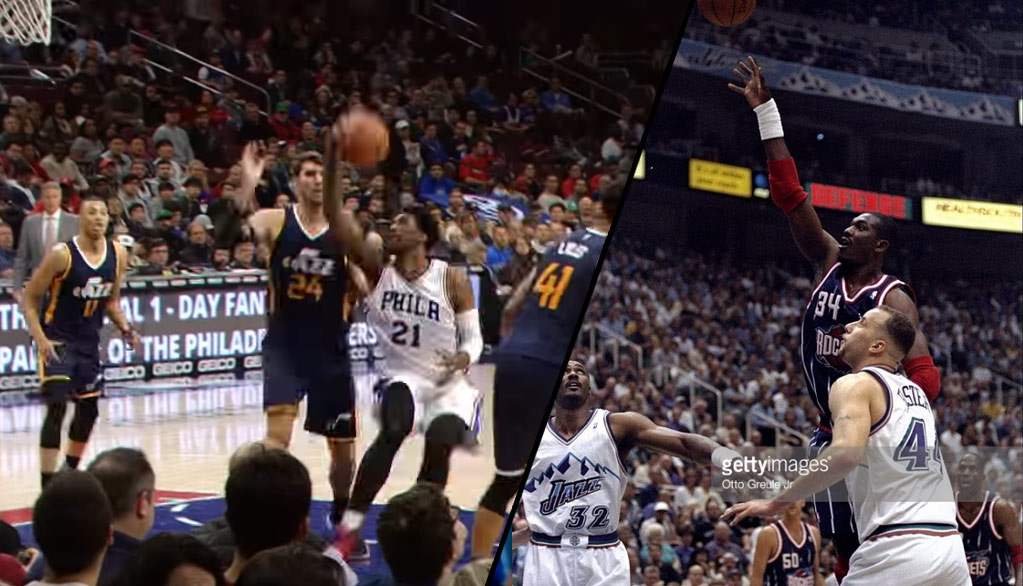 Due to foul trouble, the match-up between Joel Embiid and Rudy Gobert was a short one; Embiid had 5 fouls in 19 minutes and Gobert fouled ...(Read more)

Joel Embiid Continues To Do His Best Hakeem The Dream Impersonation

Due to foul trouble, the match-up between Joel Embiid and Rudy Gobert was a short one; Embiid had 5 fouls in 19 minutes and Gobert fouled out after just 20. But, fans still got a couple of highlights from “The Process,” including a Hakeem The Dream-like pump fake on   Jeff Withey and a dunk rejection on Derrick Favors.

Embiid finished the game with 14 points, 9 rebounds, 1 block and 1 steal as the 76ers lost by 25 and remain winless after six games (five were at home).

THE PROCESS VS THE DREAM

I have been very impressed with the numbers and potential Embiid has shown in his first two weeks of this season but when I hear some of the praise he’s getting and people calling him the “Next Hakeem” or “Modern day Hakeem” after a handful of games, it just makes me laugh. Yes, his numbers are comparable to Hakeem’s first month numbers, but you have to keep in mind Hakeem was playing alongside a prime Ralph Sampson (the other half of Houston’s Tower of Power), who was good for 21 & 10 a night. He also had to share the front court with the underrated Rodney McCray, another 20 point/double-double threat.

Again, it’s very early in the season, so let’s see if Embiid’s health can hold up and if he can avoid hitting the rookie wall. Hakeem played all 82 games and finished the season averaging 21 points, 12 rebounds and 3 blocks. He also had a few monster performances that are going to be hard to top.

The Rockets also made the playoffs and started the season with eight straight wins.