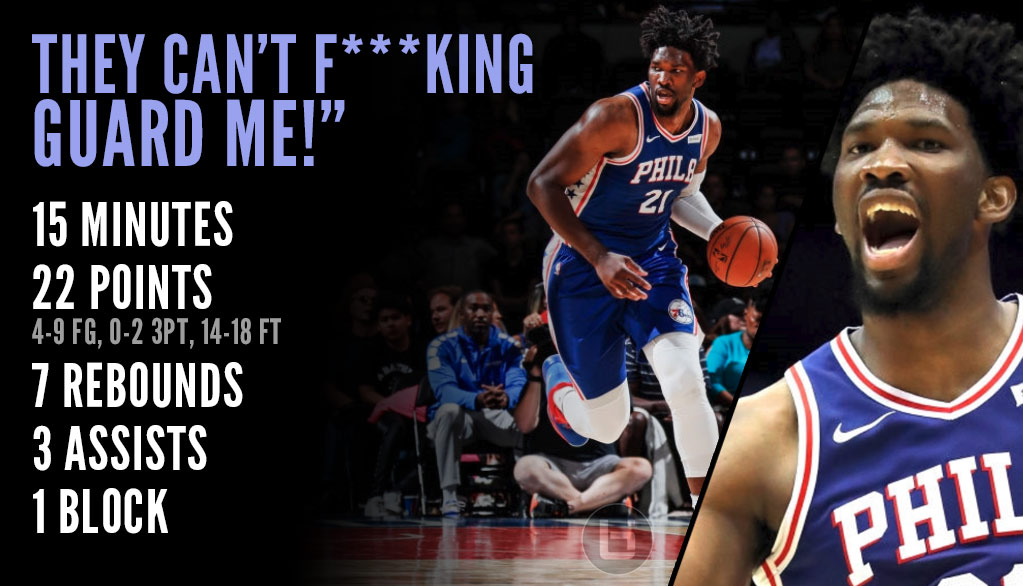 I still think giving Joel Embiid a 5-year, $148 million extension right now is crazy (Note: there is a lot of if this happens then this ...(Read more)

Joel Embiid Dominates Nets In Debut & Lets Them Know About It

I still think giving Joel Embiid a 5-year, $148 million extension right now is crazy (Note: there is a lot of if this happens then this happens and we don’t have to you pay you type stuff in the contract we aren’t aware of and I’ll probably change my mind when I heard those details). Then I’ll watch him put up 22 points, 7 boards, 3 assists and a block in 11 minutes of the first half (I don’t care that it’s a preseason game against the Lopez-less Nets) of his preseason debut and say, “that’s crazy, pay the man!”

14 of those 22 points by the center came off of 18 free throw attempts…in, I repeat, just 11 minutes! Fuck you, pay me (in my best Ray Liotta in ‘Goodfellas’ voice)!

And the biggest reason why most NBA fans want the social media MVP (sorry KD) to stay healthy and to get paid like Erick B and Rakim is because he’s just so fun to watch and easy to root for. After one of his buckets on Trevor “I think Kuzma will be better than Lonzo” Booker in the second quarter, he started saying, “they can’t fucking guard me” and I found myself pumping my fist at the TV (in front of my 9-year old daughter) saying, “yeah, they can’t fucking guard you.”