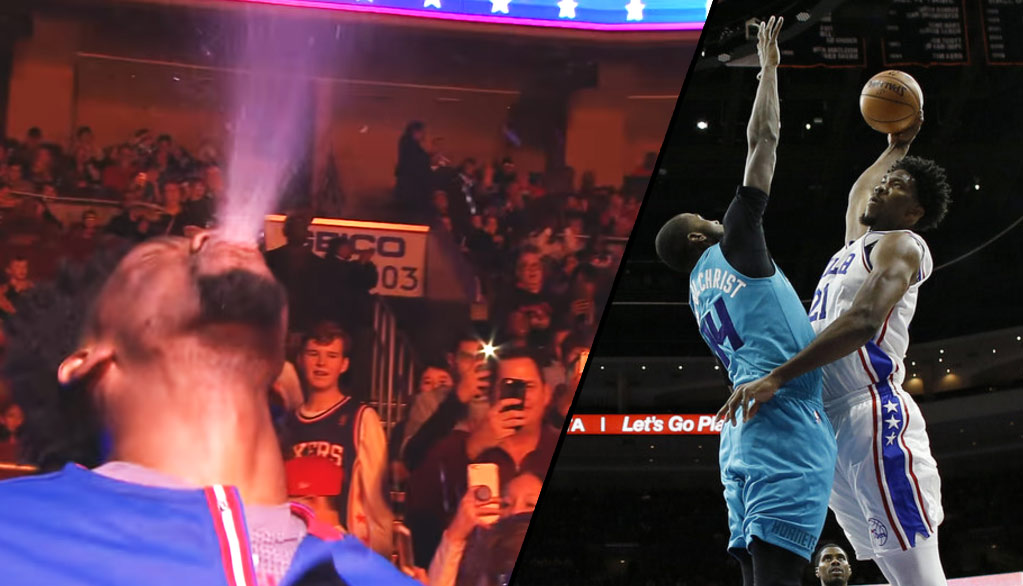 You can bet Joel Embiid’s entrance and performance on Friday night earned him some more All-Star votes. He entered the game to WWE star Triple H’s ...(Read more)

You can bet Joel Embiid’s entrance and performance on Friday night earned him some more All-Star votes. He entered the game to WWE star Triple H’s theme music and then spit water in the air the way Triple H does. The wrestler appreciated the homage and tweeted, “Still have to perfect the water-to-spit ratio…Not bad for a first attempt. #MopTheFloor #NBAVote Joel Embiid.”

Then it was game-time and Embiid dominated the Hornets, scoring 24 points (12-14 ft), grabbing 8 boards, blocking 3 shots (2 on Cody Zeller dunk attempts), getting 2 steals, dishing out an assist and dunking on MKG in just 28 minutes of the 76ers’ 3rd consecutive victory!

The crowd responded by not only giving their social media superstar and future NBA All-Star “Trust the Process” chants, some even started chanting “MVP!”

MVP? One day people, you just got to keep trusting the process: rookie of the year, then All-Star, then All-NBA, then Playoffs, then MVP, then point guard.

Back to hat Triple H homage, Embiid did say he needs to work on it a little bit.

“I kind of messed up at the end,” he said, laughing. “That was the first time I did it.”

I guess that means Embiid will try it again and hopefully has better luck than Cody Zeller did when he thought second time’s a charm.