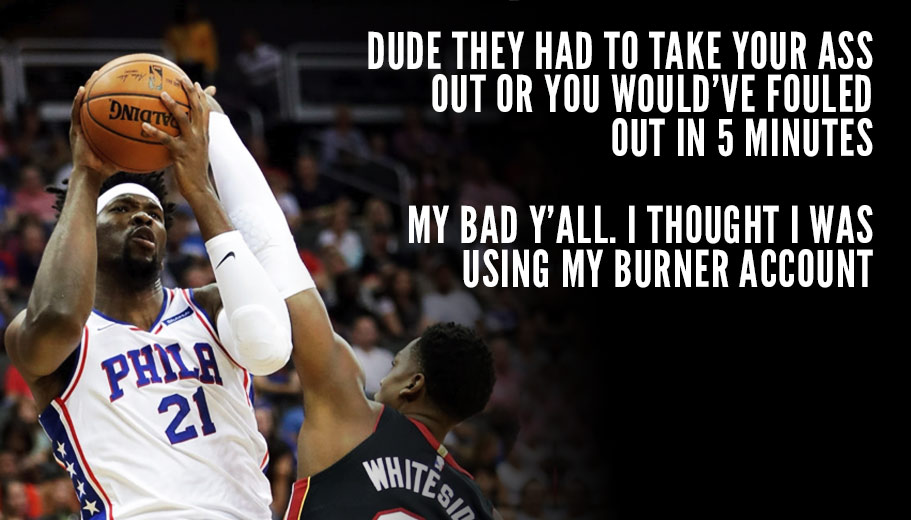 With nine and a half minutes remaining in the first quarter of the 76ers’ 119-95 win over the Heat on Friday, Miami center Hassan Whiteside picked ...(Read more)

With nine and a half minutes remaining in the first quarter of the 76ers’ 119-95 win over the Heat on Friday, Miami center Hassan Whiteside picked up his third (questionable) foul while guarding Joel Embiid. Embiid — trying way too hard to put on a show for his Kansas fans — pointed at the Heat bench and told them to take Whiteside’s ass out of the game.

After the game, the two got into a hilarious exchange on Twitter that had most of the internet thinking Embiid destroyed Whiteside both on and off the court.

Before we get into that exchange (that I hope continues throughout the season), I want to point out that Embiid had a pretty awful game: 5 points on 1-of-7 shooting (0-3 3pt), 7 rebounds, 1 block and 3 fouls in 15 minutes. Whiteside wasn’t much better but far from worse: 7 points on 2-of-5 shooting, 3 rebounds, 2 blocks, 1 steal and 4 fouls in 11 minutes. And the video above shows you a couple of those 4 fouls were questionable ones.

I also want to bring up a post made by Embiid back in November of 2016 after a game vs the Heat. 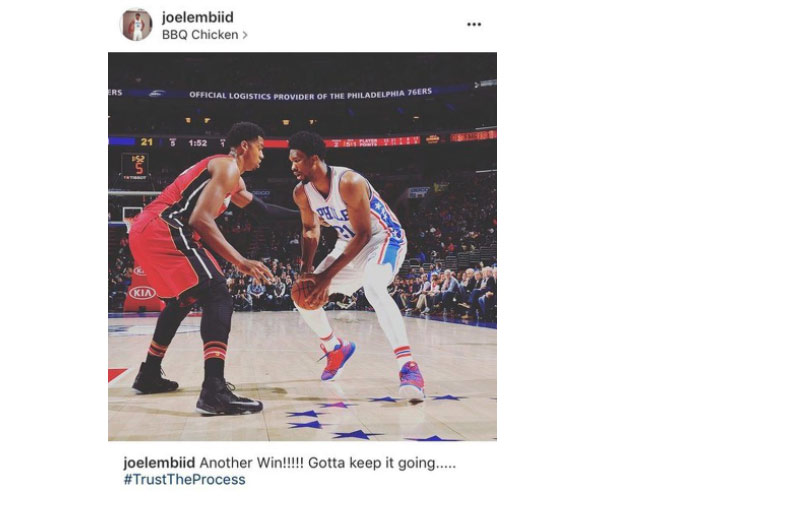 The posted photo is him going at Whiteside and for the location he put “BBQ Chicken,” the saying Shaq made famous when referring to players that couldn’t guard him. In 23 minutes of that game, Embiid had a nice line of 22 points, 5 boards and 3 blocks, while Whiteside had a game-high 32 points (13-19 fg), 13 boards and 2 blocks in 32 minutes. The reason why the 76ers won that game was because the rest of the Heat starters + 6th man Tyler Johnson shot a combined 14 for 53 from the field.

The 76ers and Heat played each other a few more times that season with Embiid shut down and Whiteside treating the 76ers like BBQ chicken: 30 & 20 in one game and 15/11/4 in a blowout win.

Here we are back to Friday night’s action, trash-talking and Twitter war. Everybody is so quick — quicker than the 76ers were with an extension deal — to award Embiid the “winner” but I think Whiteside is currently winning the battle between them on and off the court.