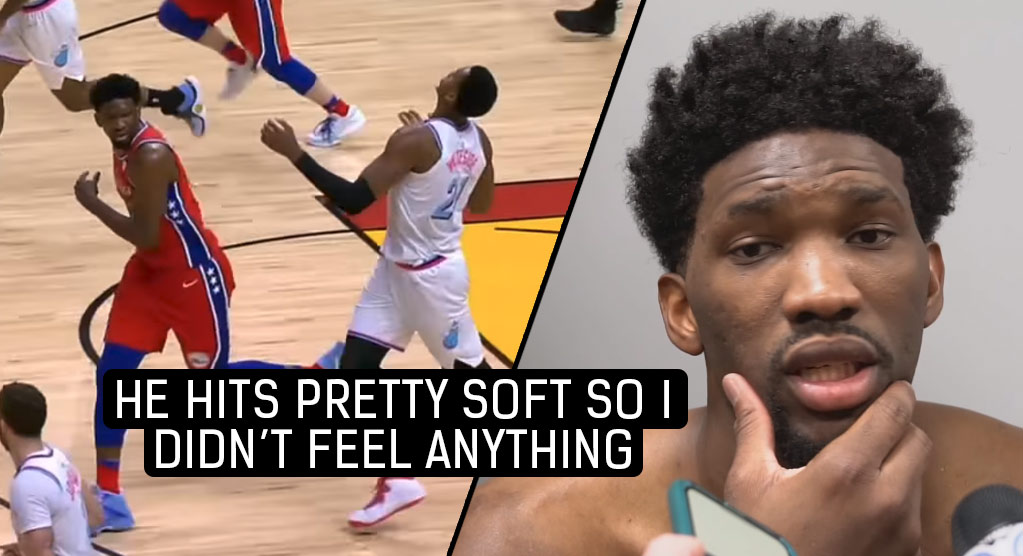 The beef between Joel Embiid and Hassan Whiteside goes way back to November of 2016, when Embiid posted a photo of himself being guarded by Whiteside ...(Read more)

The beef between Joel Embiid and Hassan Whiteside goes way back to November of 2016, when Embiid posted a photo of himself being guarded by Whiteside and a “BBQ Chicken caption.”

Earlier in the season, the two got into a hilarious twitter war after a 76ers win that included Embiid pointing at the Heat bench and telling them to take Whiteside’s ass out of the game after picking up a third (questionable) foul.

On Thursday night, the two talented, trash-talking big men resumed their beef. Whiteside won the stats battle — 26 PTS & 8 REBS to 17 PTS & 7 REBS — got the W and had the “highlight” of the night: No, not him throwing down a dunk on Embiid but him trying to throw an elbow into Embiid’s back, which led to him slapping himself in the face!

“He tried to hit me in the back, which is kind of dirty because of the fact that I’ve had back problems,” Embiid said after the game. “We’re going to see about that. I won’t forget about that. I don’t think I touched him… He hits pretty soft so I didn’t feel anything. But just the action of him trying to do that, I think it’s pretty messed up. I don’t care what we have outside of basketball but at the same time you have to respect him as a basketball player and play basketball. Have fun doing. I’m not worried about it.”