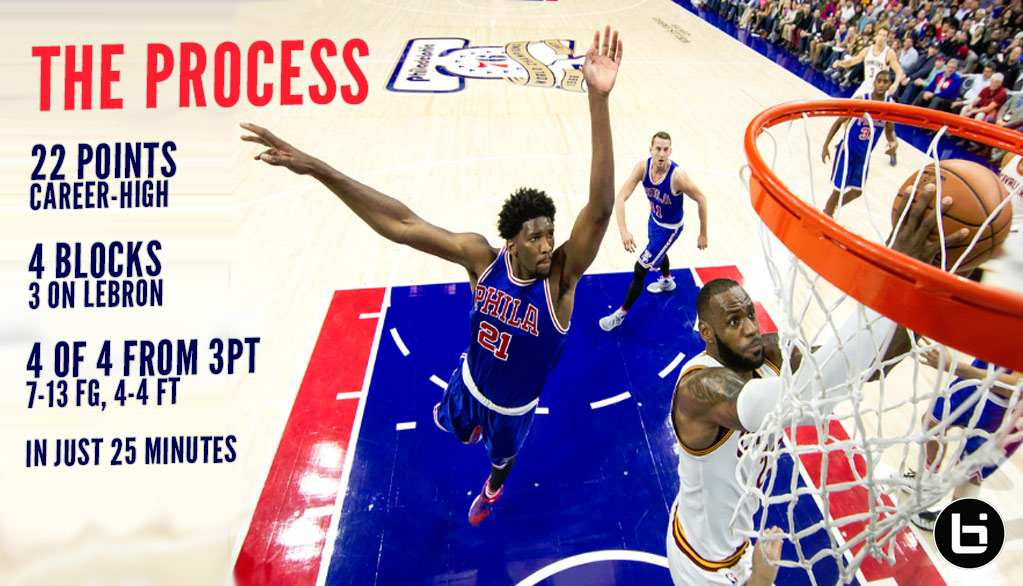 On the night LeBron James passed Hakeem Olajuwon for 10th on the NBA All-Time Scoring list, he also had three shots rejected by a rookie some ...(Read more)

On the night LeBron James passed Hakeem Olajuwon for 10th on the NBA All-Time Scoring list, he also had three shots rejected by a rookie some (I’m not ready yet because I watched a young Hakeem) are comparing to The Dream.

Joel Embiid was a force on both ends of the court during Saturday’s loss to the Cavs, scoring a team-high and career-high 22 points on 7 of 13 shooting, including a perfect 4 of 4 from downtown, and swatting away 4 shots, including 3 on The King. Toss in 6 boards, 2 assists and a steal for the fantasy players.

LeBron had a rough shooting night, making just 9 of 23 shots, but he still put up a big double-double (25 points, 14 assists, 8 rebounds) and for the first time in his career, led a team to a 6-0 start; The other three teams he led to a 5-1 start all won a championship.

Back to The Process, he’s now averaging 18.5 points, 6.3 rebounds and 3 blocks a game, while just playing 22 minutes per. If he stays healthy and doesn’t even improve throughout the season, he should run away with the Rookie of the Year award just like LeBron did.

Seriously, 4 of 4 from 3!  If you are wondering when was the last time a center (not a power forward/center like Chris Bosh or Channing Frye) was perfect from downtown by attempting as many 3s, Boogie Cousins did it last season and Brad Miller did it back in 2011. How about perfect from 3 with at least 4 blocks? The only instance in the last 30 years is Andrea Bargnani back in 2007, when Embiid was 13 years old.