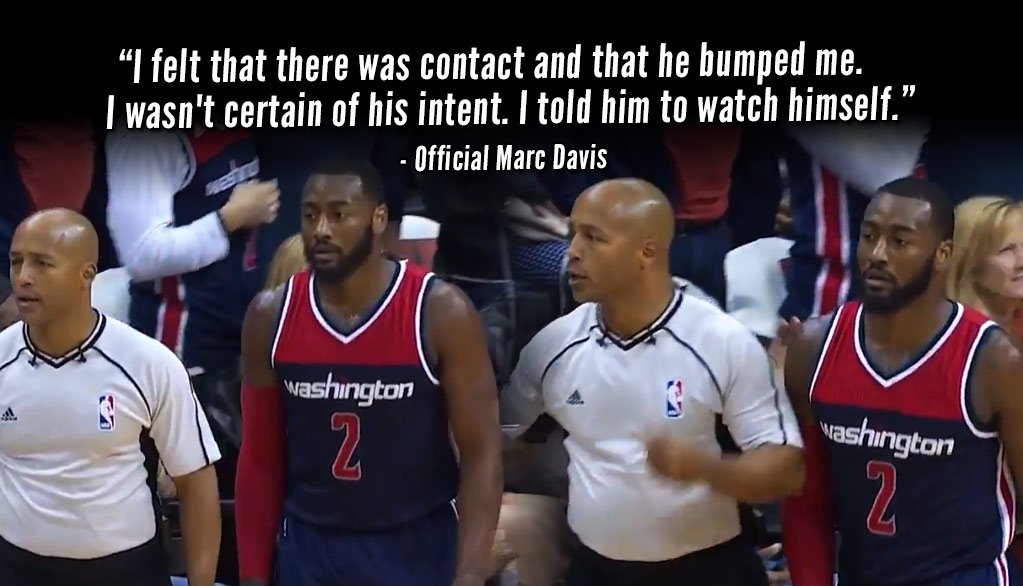 It should have been a great night for John Wall and the Wizards. Vegas had the Wizards beating the Beard and Wall was just three dimes ...(Read more)

It should have been a great night for John Wall and the Wizards. Vegas had the Wizards beating the Beard and Wall was just three dimes away from tying the great Wes Unseld’s franchise record for assists (3,822).

Wall did break the record but also got ejected after picking up a second tech for making contact and using “vulgarity” in the final minute of the loss.

Here’s NBA Crew Chief Marc Davis’ side of the story when he was asked about Wall’s second tech.

“For inappropriate language and using vulgarity towards a game official.  He already received his first technical foul. After granting the team a timeout, I felt that there was contact and that he bumped me. I wasn’t certain of his intent. I told him to watch himself. He looked over his shoulder and used vulgarity and inappropriate language and was ejected on his second technical foul.”

I’m not surprised about the “vulgarity” but the contact seemed accidental to me with the ref more at fault, so hopefully this doesn’t lead to a phone call from the league offices. Even if he doesn’t get a call, I can see why Wall is so frustrated. He’s putting up All-Star numbers and his team is 1-5 and only ahead of the Joel Embiid show in the Eastern conference standings.

As for breaking Unseld’s record…

“It don’t mean nothing to me right now, because I didn’t win the game,” said Wall after the game. “But it’s an honor, and I have a lot of basketball left to play.”