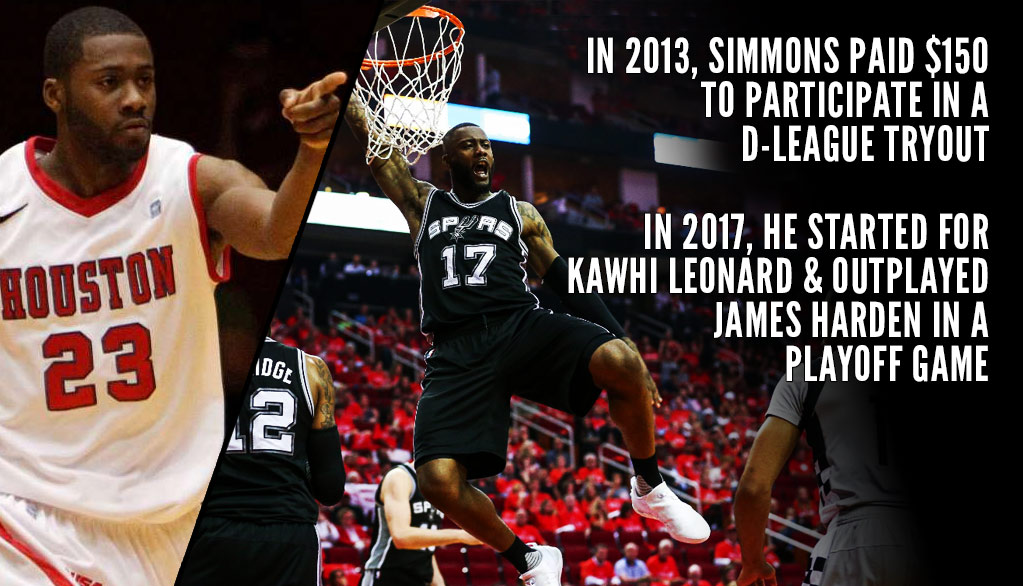 I’ve been a basketball fan for 30 years, moved to Houston, Texas 17 years ago and Sugar Land five years ago and I have never heard ...(Read more)

I’ve been a basketball fan for 30 years, moved to Houston, Texas 17 years ago and Sugar Land five years ago and I have never heard of the Sugar Land Legends basketball team of the American Basketball League. NBA success story Jonathon Simmons not only knows about the team, he was drafted (they had a draft?!) by them in 2013 and dropped 62 points in his first game. Still, I had no idea the team existed.

After financial issues with the team, Simmons almost gave up on his NBA dream and quit basketball to become a barber or work any job to feed his four kids. He didn’t and in September of 2013, he paid $150 to participate in a D-League tryout with the Austin Toros (later to be named Spurs). Two years later, he was holding a MVP trophy for the champion Spurs summer league team in Vegas. A few months later, he’s in the NBA as a 26-year old rookie. And as a rookie, Simmons showed he could put up numbers when given the minutes; He was good for 10 points if he played 20 minutes and near 20 points if he got 30 minutes. In his final regular season game, Simmons had 19 points, 7 rebounds, 2 assists and 2 steals vs the Mavs but barely got any minutes in the playoffs.

In the summer of 2016, at a Mountain Dew NBA3x event I helped organize, Simmons casually walked in and I was shocked to see how few people recognized the born and raised H-Town resident who made Sportscenter a few times in the past year for his high-flying dunks. I told a few kids, “he’s a walking success story, remember the name.”

On Thursday, May 11th of 2017, Jonathon Simmons started in place of injured MVP candidate Kawhi Leonard, outplayed MVP candidate James Harden and scored a playoff career-high of 18 points on 8 of 12 shooting against the Houston Rockets. I’m sure those kids know his name now and so does the rest of the basketball world.

THE RISE OF SIMMONS