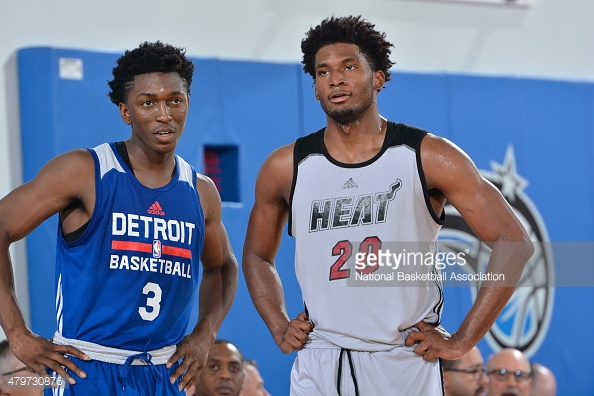 During Dwyane Wade’s Twitter Q&A on Monday, Wade was asked “how do you think Justise Winslow will fit with the team?”  Wade replied “Perfectly fine. He’s ...(Read more)

During Dwyane Wade’s Twitter Q&A on Monday, Wade was asked “how do you think Justise Winslow will fit with the team?”  Wade replied “Perfectly fine. He’s a winner!!!”

Later that day, Winslow backed up Wade’s comments by leading the Heat to a 5 point victory over Stanley Johnson and the Detroit Pistons. Winslow had a Summer League high of 17 points as the Heat remained unbeaten after 3 games.

“He’s a great player,” Johnson said. “He won the game, that’s what matters.”

Although Winslow had the highest point total and the W, Stanley had a better individual performance with 14 points (4 of 5 shooting), 7 rebounds, 2 assists, 2 steals and a block.

“He can do everything,” Winslow said of Johnson. “You saw tonight, you saw the threes, you saw the midrange, the floaters. He had a very efficient night unlike me.”

You can bet on a lot of great battles between the two future stars who have been battling since elementary school.

“Me and him are friends,” Johnson explained. “We’ve been playing against each other since the third grade, so it’s nothing new to us.”

“It’s all competitive between the lines, but when we go back to the hotel we’re going to play FIFA,” Wilsow said, before joking “that’s going to be competitive (as well).”