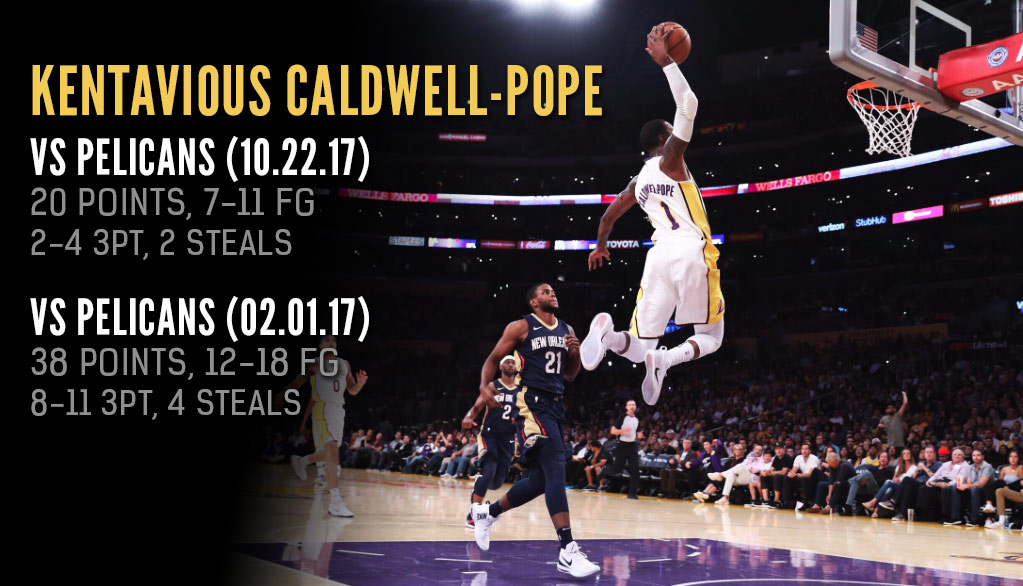 Sunday’s game against the Pelicans wasn’t just Kentavious Caldwell-Pope’s first regular season game playing with the Lakers, it was his first regular season game with the Lakers. Due to a March arrest and league suspension, he wasn’t even allowed to attend the Lakers first two games. So it wasn’t a surprise he was ready to pull the trigger on some shots as soon as he could. It also might have helped that the opponent was the Pelicans, a team that he scored his career-high 38 against last season.

In his Lakers debut, KCP, who signed a 1-year deal for $18 million in the summer, scored an exciting 20 points that included a breakaway dunk off a steal, a four-point play and a heat-check pull-up three seconds after the four-point play. He finished the game 7-of-11 from the field, 2-of-4 from three and 4-of-4 from the free throw line.

Back to his career-high last season, KCP could have had 40 if he would have knocked down all eight of his free throws. His two misses late in the game kept him at 38, but, his Pistons team got the W. AD and the Pelicans did get revenge a month later, when they held him to 2-of-11 shooting in a 23-point victory over the Pistons.