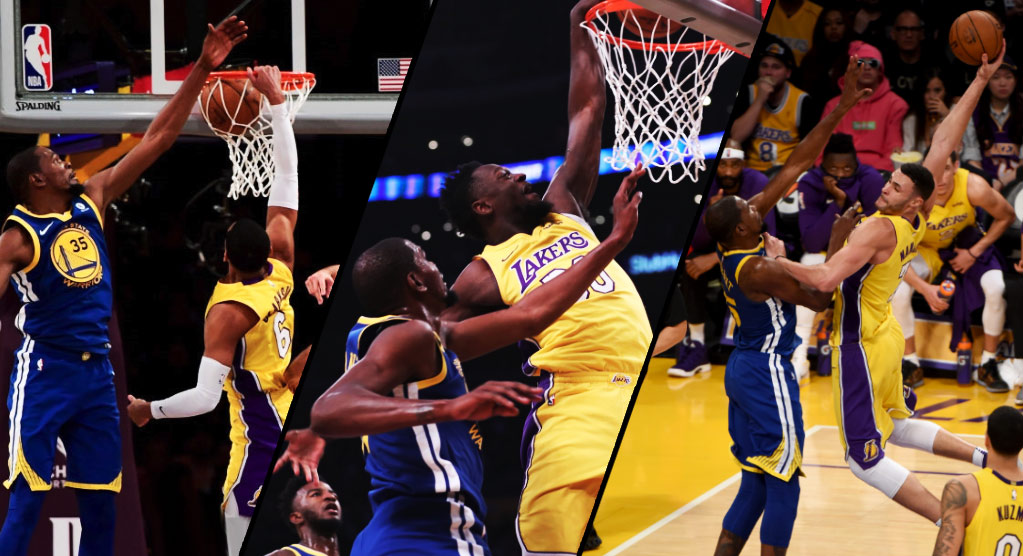 In the first half of the Lakers and Warriors game / Kobe Bryant jersey retirement show, Kevin Durant was dunked on THREE times: Julius Randle made ...(Read more)

Kevin Durant Kills The Lakers in OT After Getting Dunked On 3 Times, Said He Did It For Kobe

In the first half of the Lakers and Warriors game / Kobe Bryant jersey retirement show, Kevin Durant was dunked on THREE times: Julius Randle made the bench erupt by catching him midway through the first; Jordan Clarkson had Brook Lopez in shock, Larry Nance Jr celebrating and Kobe nodding his head in approval a few minutes later; Warriors killer (remember Festus Ezeli and David West?) Larry Nance Jr had the dunk of the night (year?) in the final minute before the Kobe halftime show with a ridiculous one-hand cock back over KD’s long (this is getting too sexual sounding) arms.

Durant wasn’t doing much better on the offensive end either, missing 16 of his first 20 shots over the first three quarters. But, like Kobe and all of the offensive greats, KD kept shooting and made six of his last nine shots, including a dagger with 7.3 seconds left in OT to give the Warriors a 116-114 win.

“That was for Kobe Night,” Durant said after the game. “I had to get them up for Kob.

The funny thing about this comment is Kobe actually left when the game went into overtime.

“I’ve had so many bad shooting nights, and I know that it makes just for a better player,” Added Durant, who finished the game with 36 points, 11 rebounds, 8 assists and 3 blocks for the Curry and Draymond-less Warriors. “I got better tonight. I fought through it, I was able to make some shots down the stretch, and I feel more confident going into my next game shooting the ball.”

Coach Kerr referenced Kobe and Michael Jordan when talking about KD’s ability to come through during clutch time.

“If you think about Kobe’s career, how many games like that did he have where maybe things weren’t going his way and he hits the game-winning shot,” said Kerr. “Michael Jordan used to do that all the time. That’s what the great players do.”

And KD is a great one…but THREE times in one night?!?