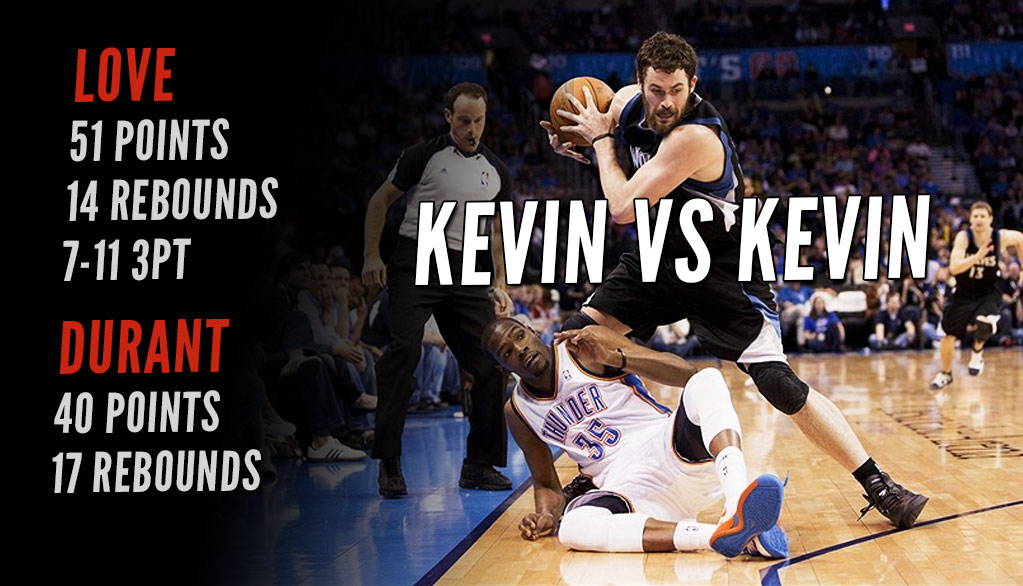 “I’m sure the fans and players enjoyed this one more than me. Both teams made incredible plays, just plays after plays.” Said Thunder head coach Scott ...(Read more)

“I’m sure the fans and players enjoyed this one more than me. Both teams made incredible plays, just plays after plays.” Said Thunder head coach Scott Brooks after a nerve-wracking OT thriller against the TWolves.

Two of those incredible plays after plays happened at the end of regulation, when both teams gave the ball to their MVP candidates – both named Kevin.

For OKC, with less than 7 seconds left on the clock, Kevin Durant pulled out a crossover and then stepped back to hit a long three putting OKC up three. The Wolves had 3.9 seconds to work with and gave it to their red-hot Kevin, who ended up with a franchise-best 51 points on 7-of-11 shooting from 3-point land. Love caught it, turned and swooshed a three forcing OT.

OKC would come out victorious as Durant (40 PTS) & Russell Westbrook (45 PTS) combined for 95 points. It was the first time in NBA history two teammates scored at least 40 points in two games in the same season. Durant also had a season-high 17 boards to go with his 40.

Love’s teammate JJ Barea also put up a great stat line of 25 points, 14 assists and 10 rebounds, which made him the first Latin American-born player in NBA history to record a triple-double.