At the Pangos All American Camp, everybody knows theres going to be all types of basketball players.  From hard cutting slashers, to point gods & of course the big boys who control the paint.  Like I said in Pt. I of this series, all players have different preferences when it comes to what type of shoes they want to wear for on the court and off the court.

Next up we have Billy Preston from Prime Prep in Dallas, Texas.  Throughout the entire weekend at Pangos, Billy opted to wear the Air Jordan Infared XX9.  Billy said that he’s all about comfort.  No matter the style or color, it’s all about comfortability.  The XX9’s have been the primary choice for majority of Jordan Brand Players this season.  Reason why, my guess is as good as yours, the comfort and support.  After the XX8’s were released I wasn’t too sure if Jordan brand could deliver another dynamic high performance basketball shoe, but they did.  We’ll see what they have in store for the next basketball shoe. 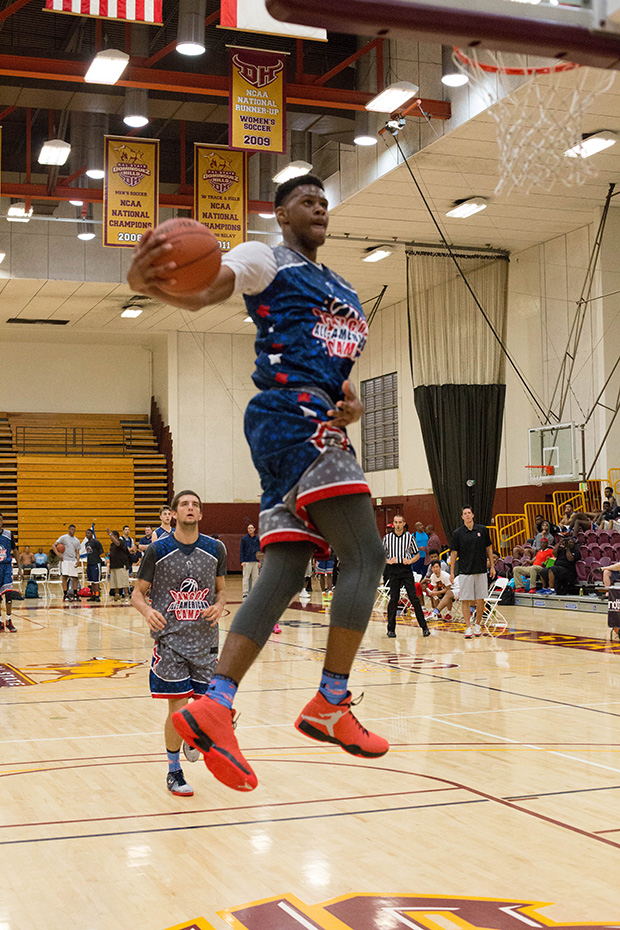 Fun fact of the day, if you aren’t really aware of who Billy Preston is, he’s actually the son of the King, that’s right.  Billy Preston is somehow in some odd way related to Lebron James.  I asked Billy where his dad was & how he’s holding up throughout this years playoffs.  Billy replied,” Pops is just resting up for the Finals right now but both of us are always on the road, we talk all the time, all day everyday.  I called him after he swept the Hawks to congratulate him on his accomplishment.”  To see more of Billy’s relationship with his “dad”, follow him on his twitter.

Up next we got Mustapha Heron of Sacred Heart in Waterbury, Connecticut.  Throughout the Pangos camp Mustapha opted for the Adidas D Lillard 1.  His answer was simple as to why he chose those for his shoes for the weekend, the comfort & he’s just a fan of low tops.  When asked about his all time favorite shoe, the Air Jordan XI reign supreme.  Although it’s gotta be the high tops in any color.  Mustapha also mentioned that when he’s out shopping for kicks, the colors have got to stand out.  He’s a fan of those bright colors which definitely turns heads & breaks necks.