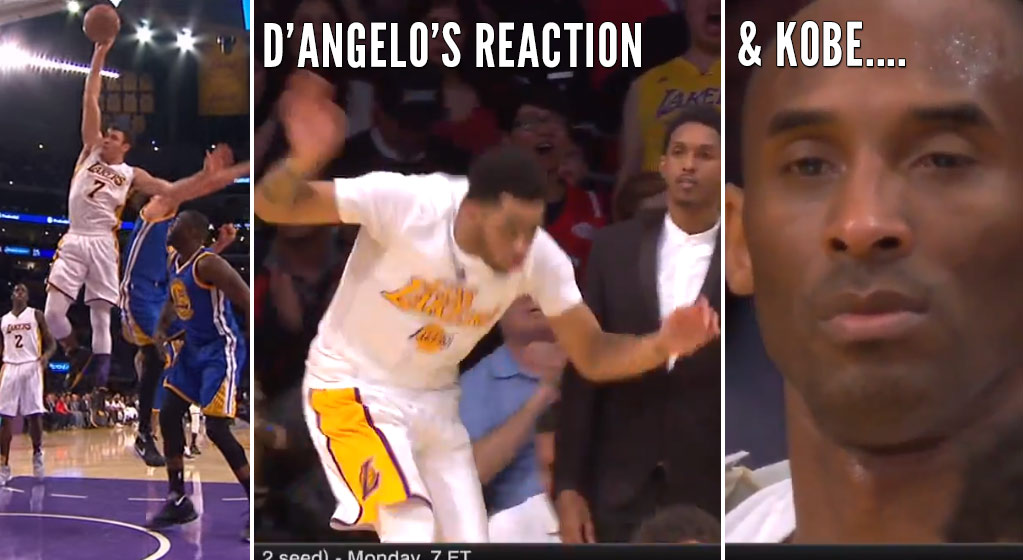 Another day, another impressive dunk by Larry Nance Jr, which usually means another amusing celebration from teammate D’Angelo Russell. During the first quarter of the Lakers’ ...(Read more)

Another day, another impressive dunk by Larry Nance Jr, which usually means another amusing celebration from teammate D’Angelo Russell.

During the first quarter of the Lakers’ upset win over the Warriors on Sunday, Russell lost his mind and started jumping up and down along the sidelines after Nance faked Draymond Green and threw down a dunk. Not shown in the video above, but clear as day in the following video, is how annoyed and/or unimpressed Kobe looked after Nance’s dunk and Russell’s celebration.

This reaction instantly reminded me of Kobe’s guest appearance on Jimmy Kimmel back in February of 2015, when Jimmy showed Kobe a video of the Lakers celebrating after a win vs the Celtics. Kobe was speechless with the same look he had on Sunday, when asked if that celebration would have happened if he was there.

The other moment that popped in my head was from earlier in the season, when Russell was given a tech for celebrating Kobe’s dunk on Clint Capela. After the game, Kobe joked that it was the best tech Russell will ever get and Russell asked Kobe to pay his fine.