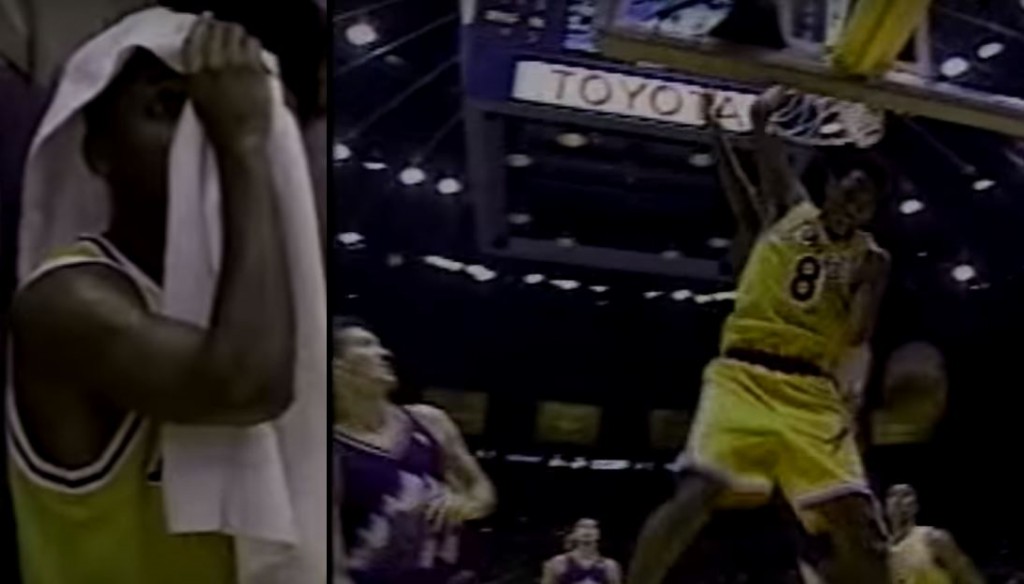 Revenge is a dish best served cold and nothing was more cold on this Halloween night than Kobe Bryant getting revenge on the Utah Jazz like ...(Read more)

Kobe Bryant’s Revenge Game vs the Jazz, 1st GM Since The Airball Game

Revenge is a dish best served cold and nothing was more cold on this Halloween night than Kobe Bryant getting revenge on the Utah Jazz like a cold-blooded assassin in a French crime film.

With Shaq sitting out the game – the first of the season – because he slapped Jazz center Greg Ostertag during the morning shoot around, The 19 year old Kobe had the green light to abuse every Jazz defender coach Sloan sent after him.

Spin move on Stockton. Dunk by Shandon Anderson. Reverse layup on Shandon Anderson. Dunk by Russell. It was one highlight after another. Kobe finished the game with a game-high 23 off the bench and was 13 of 14 from the free throw line as the Lakers beat the Jazz 104-87.

At the time, the game was seen as nothing more than Kobe and the Lakers getting revenge for their 2nd round loss to the Jazz. 18 years later, on the eve of Kobe’s final NBA game – also against the Utah Jazz – it was the first of many, many, many revenge and statement games for Kobe Bryant, who shot 4 airballs in that game 5 of the 2nd round series.

“It was an early turning point for me in being able to deal with adversity, deal with public scrutiny and self-doubt,” Bryant told the Daily News. “At 18 years old, it was gut-check time.”

“I look back at it now with fond memories of it. Back then, it was misery.”