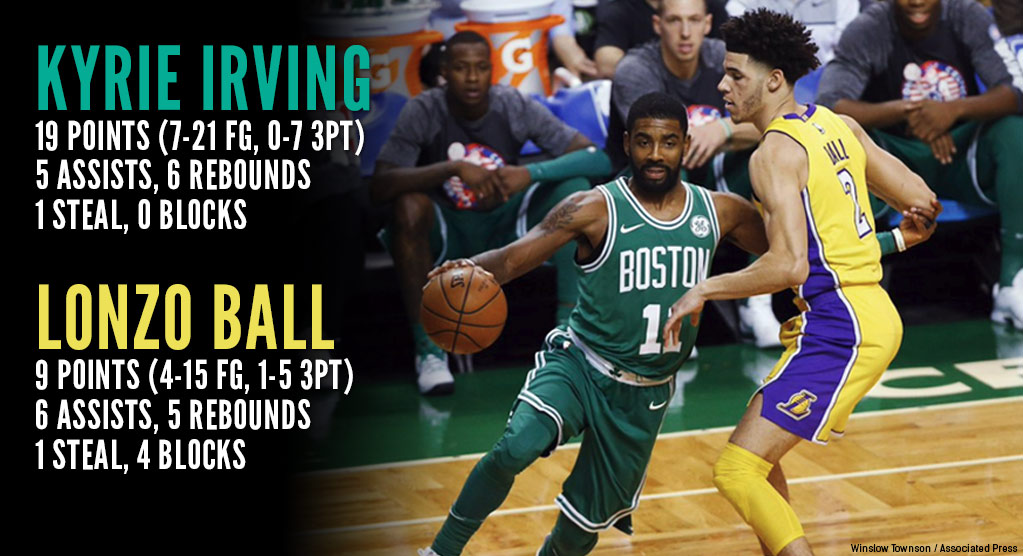 If you were just following the Lakers and Celtics game on social media, you probably thought Kyrie Irving scored at least 30 points and dished out ...(Read more)

If you were just following the Lakers and Celtics game on social media, you probably thought Kyrie Irving scored at least 30 points and dished out 10 or more assists. That’s because your social feed was probably dominated with video clips and comments about Kyrie scoring on every Laker who got playing time, including Andrew “is no Aron Baynes” Bogut. Reality is, he only made 7-of-21 shots, missed all 7 of threes and finished with just 19 points and 5 assists in the Celtics 107-96 win — the Celtics 10th in a row.

If you were just following the game on social media, you probably also thought Lonzo Ball had a rough night. Reality is… he really did have a rough night: Ball, who was booed throughout the night, scored 9 points, missed 11 of his 15 shots, 4 of his 5 threes and dished out just 6 assists in 39 minutes of action. He did have a game-high 4 blocks but the most memorable block of the game was him having his layup rejected by Marcus Smart.

After the game, Kyrie had some positive words about the rookie: “He’s 6’6, unbelievable in transition, understand he wants to get his teammates involved. Can you really put a position on him, particularly right now? I don’t know but he does a great job running that team and when he starts to get comfortable when the pace starts to pick up that’s where he starts to flourish.”