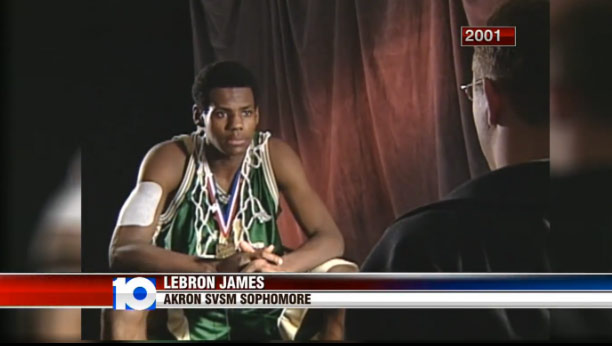 In 2001, a mature and beyond his years LeBron James was a high school sophomore at St. Vincent-St. Mary with two Ohio State championships already on ...(Read more)

In 2001, a mature and beyond his years LeBron James was a high school sophomore at St. Vincent-St. Mary with two Ohio State championships already on his resume. During that time, he did an interview with Kirk Herbstreit of 10TV and spoke about his desire to win more championships and his insatiable desire to get better and outwork everybody else. At 16, the mindset of the state champion sounds just like the 30-year-old LeBron, who was going for his third NBA championship 14-years later.

I still remember back in 2001, raving about the Akron phenom to co-workers who thought it was ridiculous to be gushing over a 16-year-old kid. But the very different from now online hoop world knew he was the next big thing. People were selling (and I was buying) VHS tapes from LeBron’s sophomore season; short Quicktime video clips of James were being uploaded to PSP sites (LimeWire & Kazaa); I was considering registering lebronjames.com (which was available) and stories from camps like the Adidas ABCD one were circulating message boards.

After the ABCD event, camp director Sonny Vaccaro did some LeBron gushing too when he said, “This kid has a chance to be an icon.”

So the 2001 throwback interview might shock some people who are surprised at LeBron’s mindset at 16 but for those who remember him back then and watched him grow from a man-child to one of the greatest players of all-time, the only surprise is some people still doubt him.