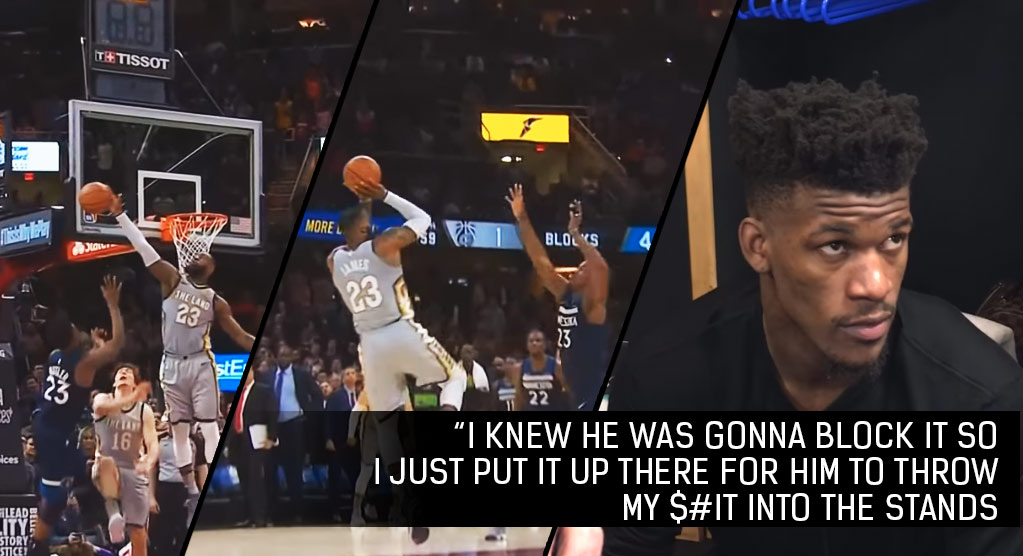 Jimmy Butler had a team-high 35 points on 14-of-21 shooting to go with 6 assists and 5 boards against the Cavs on Wednesday. But the only ...(Read more)

LeBron Blocks Jimmy Butler, Then Makes His 2nd Game-Winner Over Him

Jimmy Butler had a team-high 35 points on 14-of-21 shooting to go with 6 assists and 5 boards against the Cavs on Wednesday. But the only images of Butler fans are going to remember is him getting swatted by LeBron with three seconds left in overtime and him trying to block LeBron as the King drilled his 5th career game-winner at the buzzer. It’s an image Butler has seen before because this is the second time LeBron has made a buzzer-beating game-winner over him; the first came back in 2015.

When asked about the block, a rightfully irritated Butler sarcastically responded, “I knew he was gonna block it so I just put it up there for him to throw my shit into the stands.”

In the other locker room, LeBron — who had 37 points, 15 assists and 10 rebounds and became the third player (joining MJ & KG) in NBA history to become a franchise leader in points, rebounds and assists — and the Cavs were on cloud nine after losing their last two games by a combined 50 points and last eight games on national TV.

I just hope they let birthday boy Isaiah Thomas join in the celebration.