In the final minute of the first quarter of the Cavs win against the Jazz on Saturday, LeBron had the dunk of the night with a lefty alley-oop dunk that left him staring at his hand the way his former teammate, Shaq, used to do after throwing down an oop that surprised himself.

After the game, James, who put up 29/11/10 and passed Larry Bird for most triple-doubles of all-time, posted a beautiful pic of the dunk with this amusing caption: (Inner self)Mr. James please watch your head! Thanks for your concern (inner self) but I’m going to continue to elevate higher and higher until I jump out the atmosphere. 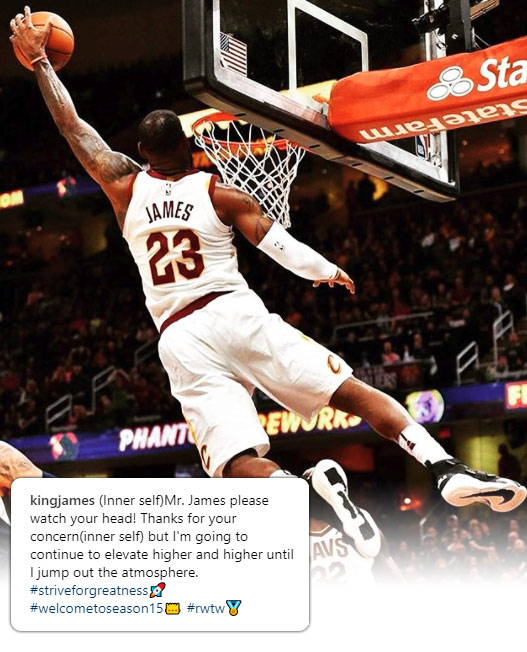 Old school basketball fans probably had flashbacks of the 90s LeBron James throwing down a similar dunk during his memorable Rookie of the Year campaign. I know the “90s LeBron” comment is going to offend some youngsters but Grant Hill was “LeBron James before LeBron James” and the first “Next Jordan” deserving of the unfair comparison.  The high-flying triple-double threat was so good and popular during his rookie season he was the leading All-Star vote getter. He was also just one of six players to ever average 20/5/5 over his first six seasons. The other five: Oscar Robertson, Jerry West, Larry Bird, Michael Jordan and LeBron James.

Back to the dunk that ended up on so many basketball montages in the mid 90s, here’s the “buckle up” moment followed by a couple of must-see Hill videos, including the Open Court crew asking, “What if Grant Hill didn’t have the injuries?”