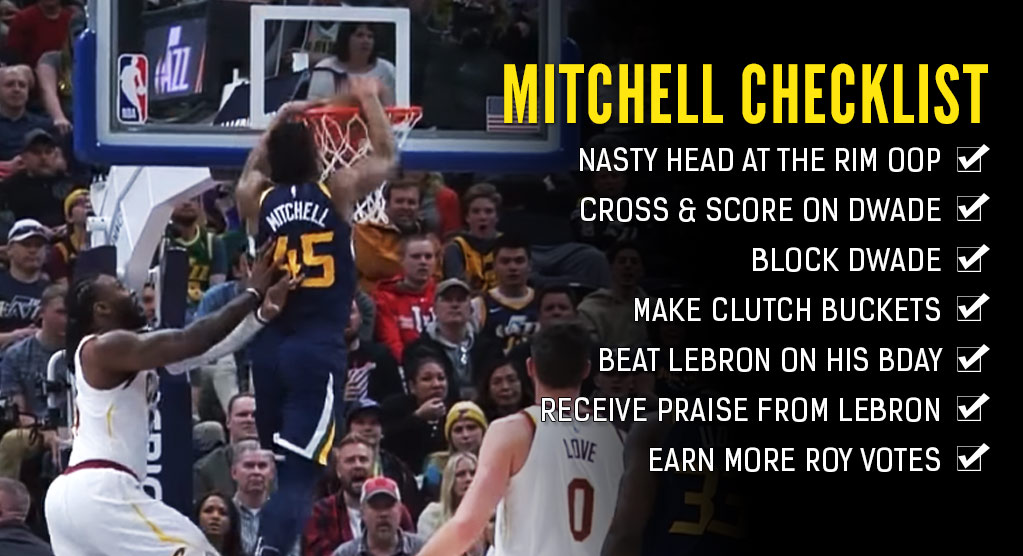 Donovan Mitchell’s Rookie Of The Year campaign just keeps getting stronger and better after every game. On Saturday, the high-flying rookie ruined LeBron’s birthday game (I ...(Read more)

Donovan Mitchell’s Rookie Of The Year campaign just keeps getting stronger and better after every game.

On Saturday, the high-flying rookie ruined LeBron’s birthday game (I specifically said “birthday game’ and not just “birthday” because the 33-year-old LeBron has kids and a life outside of basketball so a regular season game isn’t important enough to “ruin” a day meant to appreciate the life you have) by scoring a team-high 29 points in a 104-101 victory over the King and his Cavs, losers of four of their last five games after winning five in a row.

The rookie scoring leader (18.2 PPG) also had 6 assists, 4 rebounds, 3 steals, 2 threes, 1 block and got to check off the following cool things to brag about.

“He’s a player,” James said after the loss. “The kid got a lot of game and they’ve been riding that wave all season since they realized what they actually got. He’s not afraid of the moment. They put him in situations where he can succeed and he tries to take advantage of it.”