So who the hell gets into a fight at a “Stop The Violence” Charity Celeb Game? Lil’ Wayne that’s who! The same rapper who was once kicked out of a Heat game and supposedly “banned from the OKC arena” by James Harden who was supposedly dating Wayne’s ex Trina. The same rapper who said he was going to have Gerald Green dunk over him as he rode a skateboard in the NBA dunk contest.

Anyways, so here’s what happened at this game according to TMZ

Lil Wayne got so furious at a referee … in a charity basketball game … he charged at the guy, allegedly SPIT on him — and sparked a bench-clearing fight at a “stop the violence” event!

The brawl went down in St. Louis on Sunday night. Wayne’s Young Money team was taking on a team coached by the event promoter, Loose Cannon Slim — and we’re told Coach Weezy thought the ref was blowing a bunch of calls.

In the video, Wayne is running after the ref with his whole crew behind him — and the ref is wisely retreating into the crowd. Witnesses claim Wayne had already spit on the ref at this point. 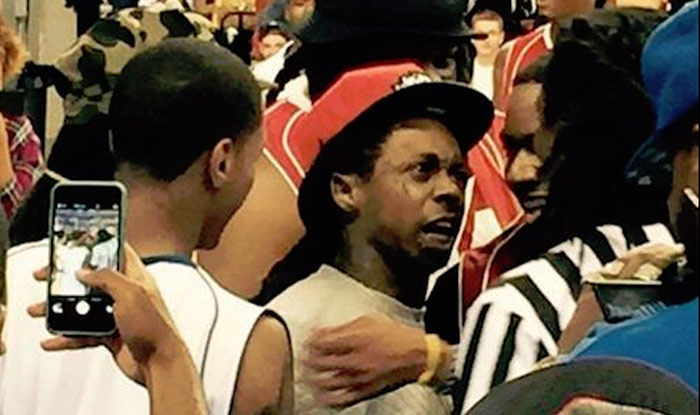