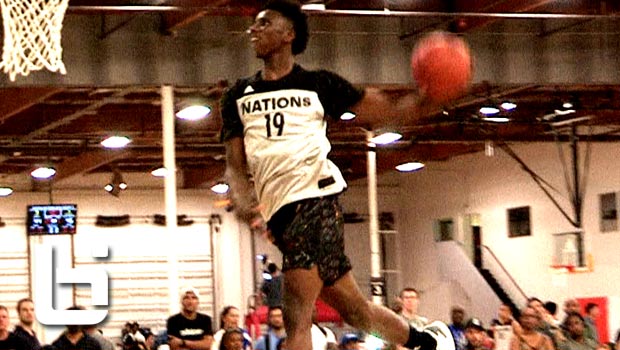 With the summer grassroots season winding down, many of the nation’s elite players are looking to end it on a high note at adidas Nations. It ...(Read more)

With the summer grassroots season winding down, many of the nation’s elite players are looking to end it on a high note at adidas Nations. It will take a monster effort for one of the eight other teams to knock of Team Harden 2017. That team is about as loaded as any ever at this event and may be the most loaded grassroots or high school-oriented team we’ve seen since the 2007 McDonald’s All-American West team. The group of seniors-to-be is 4-0 so far and are the favorites to win the event on Monday afternoon. Can anyone knock them off?

There is a plethora of NBA scouts and national grassroots basketball media at the Next Level Sports Complex in Garden Grove, Calif. to watch elite high school and college players close out the summer on a high note at adidas Nations.

Team Harden, a group of 2017 prospects, is getting most of the attention from scouts among the high school teams — and for good reason. As far as grassroots basketball and national all-star teams are concerned, it might be the most talented team we’ve seen the last 10 years. Just check out the names on this roster: Hamidou Diallo, Gary Trent Jr., Troy Brown Jr., D.J. Harvey, Trevon Duval, Kevin Knox, Wendell Carter, DeAndre Ayton, P.J. Washington, Jaylen Hands, and Makai Ashton-Langford. Seven or eight in that group will be selected for the 2017 McDonald’s All-American Game.

It’s ironic because Harden played on the last team we can vividly remember more talented than this one — the 2007 McDonald’s All-American West unit that played at Freedom Hall in Louisville and was coach by current Taft (Woodland Hills, Calif.) coach Derrick Taylor. That team was so loaded Harden, who would eventually develop into the No. 3 of the 2009 NBA Draft, really couldn’t get much playing time in the scrimmage or the game. Current NBA all-star forward Blake Griffin, the No. 1 pick of that same draft, turned heads in the scrimmage with his play but he too couldn’t crack Taylor’s starting lineup. The starters for the game were 2011 NBA MVP Derrick Rose at the point, Eric Gordon at the two, Michael Beasley at the three, Kevin Love at the four and Cole Aldrich at the five.

Four of those starters were among the top seven picks of the 2008 NBA Draft and a few off Team Harden will likely go high in the 2018 NBA Draft. The team is 4-0 so far at adidas Nations, pulling out four competitive wins, including a 101-83 victory over Team Wiggins 2018. The game was close until the older unit pulled away in the fourth period. After leading by six points (75-69) entering the fourth, Team Harden was able to get gain an advantage on the break, as Diallo, Washington, Duval and Harvey scored on a variety of easy transition buckets , including some rim-rattling dunks. Doing a majority of the setup was Brown, Hands and Duval, who led Team Harden with eight assists.

Ayton, who is arguably the top overall prospect in the 2017 class, led six Team Harden players in double figures with 17 points on 8-of-9 shooting from the field. Ayton has stated Kansas, Arizona and Kentucky are his three finalists, but there are growing legions of scouts and NBA personnel that don’t feel he’ll play a minute in college. He’s one of the early candidates to be taken as the No. 1 pick in the 2018 Draft, so it will be interesting to see where he ends up after his senior season of high school. Ayton had 12 points, eight rebounds and two steals in a 97-86 win over Team Asia Pacific on Saturday morning and opened play with a 19-point, 15-rebound performance in a 92-87 win over Team Rose 2017. On Sunday morning, he took over with his rebounding and passing in the fourth quarter of a 104-89 win over Team Canada and finished with 26 points and 11 rebounds.

Ayton and Zion Williamson, a 6-foot-7 2018 prospect out of Spartanburg Day School (Spartanburg, S.C.) who is playing for Team Wiggins, have been the two best players we’ve observed through pool play at this event.

Duval made 3-of-5 three-pointers and 7-of-9 field goals good for 24 points in the win over Team Asia Pacific continues to state his case as the best lead guard in the 2017 class, although he sat out Sunday morning’s game. Trent (22 points) and Diallo (21 points) also played well in the victory over Team Rose 2017. In reality, however, any player on the roster has the ability to step up and dominate. It’s just a matter of managing playing time (not to mention egos) and finding the right combination for this team to take home the team title once pool play is done on Sunday afternoon and championship play begins Sunday night. The championship game is slated for Monday at Cerritos College (9 pm ET, ESPNU).